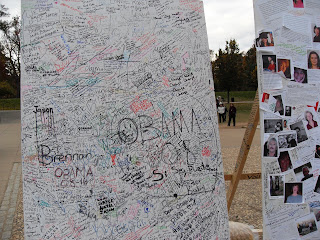 Barack Obama’s transition team is openly asking for sensitive information in the political appointments that it will fill. This item appeared on ABC's "Good Morning America" Nov. 13. Some of the interesting questions include

(1) Identifying the applicant’s “Facebook” page or, presumably, any other social networking page (Myspace) or Profile (Linkedin) or blog or personal website.
(2) Identifying the legal spouse’s job to avoid nepotism (not clear if this would include domestic partners who were not legally married)
(3) A history of any bad text messages or emails that one might have sent

It’s important to note that the federal government does not ask these questions with normal civil service jobs (such as on USAJOBS).

But, given the concern over “online reputation” the way the media has reported it recently, it brings up the question whether some private employers (even for less “sensitive” jobs) or even college admissions officers will start asking specifically about social networking profiles and blogs.

Later, on ABC "World News Tonight", the report expanded to show the "63 questions" on the form, which include listing all previous relationships and intimate partners.
Posted by Bill Boushka at 6:31 AM