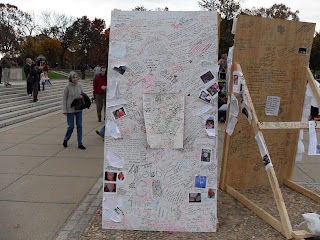 On September 28 on this blog, I discussed the subject of insurance for bloggers. I added some more references to that entry yesterday after getting an email from someone in the insurance business.

Media perils insurance, also called media risks, has long been around. Until the Internet age, it largely insured book and magazine publishers (and authors) and broadcast journalists. In general, the insurance industry knew how it could calculate the actuarial risk for “conventional” large media organizations who followed well-established procedures, especially for fact-checking. As noted before, there have been a few attempts to offer media perils coverage for bloggers and less "established" writers. Some companies have tried to underwrite such coverage under "umbrella" policies associated with auto or home liability; but intellectual property issues are so different from physical property problems that it does not sound like a good idea to try to bundle them this way; doing so could conceivably jeopardize the more conventional portions of casualty and liability coverage.

Obviously, estimating the "asymmetric risk" for “amateur” bloggers seems to involve accepting a lot of uncertainty. It rather resembles “L’Hopital’s Rule” in calculus. You have some unpredictable functions that you are trying to compare in a limiting case. One unpredictable factor is the likelihood that someone will go after an amateur with no real pockets. It has not happened much so far, although the ABA says that this is increasing. On the denominator side is that fact that bloggers typically don’t have the resources for fact checking. Another uncertainty is the range of subject matter, and range of setups of personal sites, ranging from conventional sites to blogs to social networking profiles. Still another uncertainty is the possibility of “libel tourism” litigation from overseas (where the websites can be read), although the likelihood of collection of judgments is perhaps very low. This ties into concerns about frivolous litigation or SLAPP lawsuits intended to bully or intimidate people of lesser resources into silence. Some states, like California, have made considerable progress in reigning in on this problem. It should be noted that SLAPP (strategic lawsuit against public participation) was an issue before the Internet and tended to focus on local, real-world protest activities often against local “powers that be.”

Still another problem is “online reputation.” This is the area where the practical problems live in the Internet. Reputation is in the eye of the beholder, and some people in publicly sensitive jobs could be more harmed by rogue comments on the web than could others. Families also vary in their sensitivity to “reputation.” The “Gossip Girl” syndrome would surely worry insurers.

The other problem that could worry insurers is controversial subject matter. They may worry that controversy will attract frivolous litigation, with unpredictable results. If a site discusses the topic of “gays in the military” or “don’t ask don’t tell”, an insurer may wonder if the purpose of the site is to do “forced outings” of specific gays in the military (obviously inviting legitimate litigation), rather than discuss DADT as a social and political issue. The insurer may simply be unable to “tell.”

In my case, it’s also the range of subject matter. My blogs cover “everything” because I believe that all political and social issues are interconnected. I think, for example, that there are ethical and political connections among such issues as national service, a possible draft, gays in the military, gay marriage, gay adoption, eldercare, and Internet speech. To cover one of them it becomes necessary to cover them all. Otherwise the issues get balkanized. The ability of individuals or small groups to cover “everything” (and "connect the dots") provides an important break against special interests (who admittedly want to protect their turf and lobbying jobs). Otherwise, we are left with juvenile activism where people carry picket signs or email form letters written by others but have no political or social intellectual awareness beyond their own immediate “needs”. Democrats – take heed – you’ve been guilty of exploiting this!

There have been a few horrific tragedies resulting from wrongful Internet behavior. Most of these have to do with cyberbullying, impersonation or outright defamation, often targeted at relatively narrow audiences such as public school student populations, but often made available for the world to see. By an large, these incidents have nothing to do with “issues” but their notoriety can affect the long term ability of everyone who wants to use the Internet as a forum for debating issues.

The danger is that people will demand that laws be passed to require all amateur “global speakers” to have insurance, and such a measure would shut down much of the Internet world as we know it. (Imagine the effects on Wall Street.) The facile model would be auto insurance, One can, after all, make the argument that the First Amendment, while conferring the right to speak or assemble in a real-world manner, does not guarantee a fundamental right to “fame,” “free entry”, or global distribution. If one has global reach, one should demonstrate the resources and personal accountabilities to cover the risk one might create for others – at least that’s how the secondary argument could go. "Asymmetry" putatively triggers novel moral concerns that challenge our previously sacrosanct model for individual rights and particularly individualized speech. But such an argument sidesteps the real problems: frivolous litigation, and an ambiguous notion about what “reputation” and even “privacy” means today, as George Washington University law professor Daniel Solove has pointed out in his last two books. Furthermore, it ignores the lack of ethical standards in the Human Resources (and college admissions) world as to how Internet profiles and blogs should be viewed when found during the application process.

A concomitant risk is that political pressure could be brought to bear to weaken Section 230 protections for ISP’s and comment facilitators, or to favor large media interests in the way DMCA safe harbor provisions are used. The Viacom litigation in process speaks to that point.

There is a lot at stake here, not just future Internet company earnings and viability, but also the way our democracy functions. This issue really can become cannon fodder for the special interests. The new president Obama will surely hear about this and need to think about it carefully, if quietly at first.

What should be done? Well, it’s incremental. The most important step is to seriously consider national tort reform, to reduce lawsuit abuse. Maybe we need a “loser pays” system, or at least much more care judicial oversight of intellectual property litigation. (This brings up all the issues that came out of the DMCA and P2P issues, of course.) We should have national standards with respect to the SLAPP issue. And we need to pass in-process legislation discouraging foreign “libel tourism” immediately.

Another step is to include intellectual property instruction in public schools. Kids need to learn about copyright, patent, trademark, and, more importantly, the harms of libel and defamation. Dr. Phil (and his son Jay) has done us a good favor by opening up the subject of cyberbullying. But schools are hardly prepared now to offer this instruction. Many times administrators and teachers themselves are ill informed on the problems. They need to hire the help from the software industry.

Another point is that concepts like “privacy” and “right of publicity” need some rethinking, and there may need to occur some changes on common torts manuals.

Likewise, the Human Resources world (and college admissions world, too) needs to sit down and figure out what practices in “background checking” candidates on the Internet are ethical. There is a lot of carelessness in the way this is done, as search engines and social networking sites (and Web 2.0) were never designed to be used this way. What started as an opportunity for open democracy could be perverted into an instrument of social conformity. Just look at China! This is an area where the president can persuade or jawbone business, but there is not much (about "private" HR practices) to be easily done legislatively.

The law background of our new president should serve him well in understanding these issues. But it is essentially non partisan. Some of the points I bring up sound like they come from conservatives and libertarians. Indeed, Democrats will have to resist the temptation to support changes in the legal environment that suppress individual initiative and encourage co-dependency and favor well-established special interest.
Posted by Bill Boushka at 9:09 AM

I recently came across your blog and have been reading along. I thought I would leave my first comment. I don't know what to say except that I have enjoyed reading. Nice blog. I will keep visiting this blog very often.