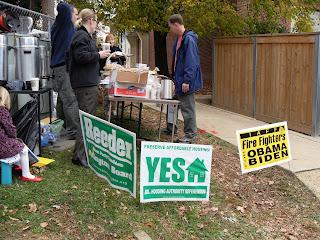 ‘Twas a gentler, quieter voting experience than I expected. The media was showing four block lines everywhere in the DC area, and talking about three hour lines for early voting all over the country. Yet, at around 10 AM this morning, I was about third in line to have my voter ID checked, and only had to wait for about six voters to get to a WinVote machine.

The actual software worked slightly differently this time, displaying your choices to you before prompting you to press Vote. There seemed to be one extra step.

In previous elections, election judges in Virginia would disconnect individual WinVote machines and carry them out to cars for disabled voters. That proved to be time consuming and to perhaps increase the risk of machine crashes, so now sealed paper ballots (counted by Scantrons, like multiple-choice tests) are used for voters unable to stand in line at the polling place.

I also heard that two of the machines had been crashing or hanging. I’ve worked polls before, but did not do so this time, with the prospect of a 20 hour day. There are elaborate procedures for rebooting and bringing a machine back up (and connecting it to the local closed network), and it does not lose the votes that have been cast (they are supposed to be stored on a memory stick). But they do not provide a detail paper audit trail, which probably should be required. (Although Virginia seems to have an argument that a paper trail actually increases the risk of problems.)

There is a story by Kim Zetter in Wired, “Lab that Tests and Certifies Voting Machines Suspended”, Oct. 29, 2008, link here. The laboratory in question is SysTest Labs. However, the Election Assistance Commission (EAC), set up by the National Institute of Standards and Technology (NIST) maintains that the company did not set up an adequate plan.

There is an older story by Zachary A. Goldfarb in the Washington Post, Feb. 19, 2007, “Campaign Strengthens for a Voting Paper Trail,” link here, with pros and cons about paper trails.

Later in the day Tuesday, there were scattered reports of voting machine failures in Virginia, and one or two precincts had to go to paper ballots.