Dr. Phil and Donald Trump: Life is not "fair", but things have really changed! 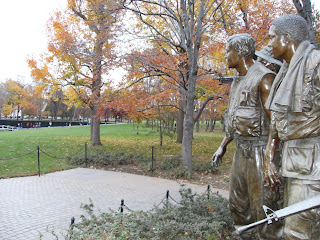 Yesterday (Nov. 13) Dr. Phil made a typical remark, that life isn’t “fair” (Donald Trump has said that, too). I thought back my posting Wednesday and “fairness.”

A half century ago, we had an unwritten social contract that regulated the lives of individuals in relation, particularly, to the family. It went something like this: If you did anything for yourself – experience intimacy, or gain attention or recognition – you willingly accepted some uncertainty and shared the potential burdens of others, especially in the family. That got to be focused on the “no sexuality outside of marriage” idea (and all of the social pampering of courtship, marriage and “blessed events”) – it was a way to guaranteed that everyone shared the responsibility and “risk” – financial and emotional – of providing the next generation (and caring for the past one, which is rapidly becoming a major issue again). It had always been mixed with gender role expectations. There was a sense that if this principle were not universally followed, trust and morality would break down and no one would be able to raise their own families. When some kind of duty is "mandatory," people may find "meaning" in filling it. Yes, often this idea was tracked back to religion and various passages of scripture. It involved covering the idea of individual self-concept with the identification with faith and family, often established by the social structures ruled by others “in power”. This fundamental idea explains what we know as “homophobia.”

We changed our minds about this, starting the process largely in the 60s, because of the confluence of a number of factors, including technology and a recognition that intellectual and personality diversity could actually be a survival resource for a culture when challenged militarily or from any external source. Many factors went into this process, which followed on the heels of the Civil Rights movement. These factors included increasing opportunities for women and gender equity in work and even (almost) the military, and “gay rights.” Some people think we went too far, turning the baby boomers into a “me generation.” But the end result was that previously sacrosanct ideas about blood loyalty and family cohesion became breached. Younger generations wanted to place more emphasis on “fundamental rights” defined in terms of personal choice (and define responsibility in terms of that choice), self-expression, intimacy with consenting adult significant others, and a flexible notion of “right to privacy” (which has certain changed with the Internet). Previous ideas of freedom, all the way back to the American Revolution, had left the family and local community as an intermediary between the individual and the capacity to reach and affect the rest of the world.

Where does “fairness” fit in? In the 50s, there was a definite idea of “local fairness” of the place for people in the family, and indeed society became duplicitous in its insistence that every adult should (whatever competitive concerns) be able to start and keep one (through monogamous marriage). There was gross unfairness at the macro level, most of all, in the United States, based on race, but also on economic class. Indeed, most of the economic instability of the past could be cast in terms of extreme differences between the spending power of the very rich and the poor. The emphasis on individualism, and the transparency of information transmitted to and from the individual (“the knowledge of good and evil”) have gone a long way to reducing past injustices based on race, religion, nationality, or any other group affiliation, as we now see with result of our latest presidential election. But the asymmetry inherent in hyper-individualism can introduce and exaggerate injustices of its own and introduce previously unimagined perils. There are always people who fall behind and feel left out, and who were better off in a world where the family for its own sake has more emotional meaning. We have gotten used to somewhat exaggerated ideas of personal freedom and sovereignty, and must hang onto a “stalking wild pendulum”. There is no such thing as a perfect system or a perfect moral ideology. It is people who are good and bad. There is always a need to balance choice with duty.

What anyone’s opinions (including mine) are about addressing all of these inequities is not so important as is understanding the history of how things came to be the way they are today. A major purpose of the detailed narratives of my “Do Ask Do Tell” books (especially the first one) is to trace how things changed. The period in which I came of age (from the late 50s to about the time of Watergate) is as critical to our understanding of individual rights as any in our history. Yes, I would make a movie about it if I had the resources.
Posted by Bill Boushka at 8:29 AM