Pew Internet Project notes that many jobs require online self-promotion and reputation management; watch the use of nicknames and real names 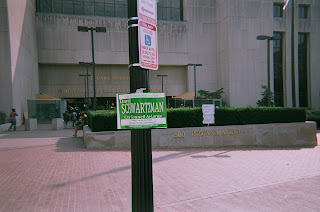 The Career News has another story about employers and search engine background checks, here. Apparently the story comes from columnist Anita Bruzzese, who has a blog and book called “the 45 Things You Do that Drive Your Boss Crazy.” Anita has another essay “Protecting Your Online Reputation”, here.

In this case, a former manager found unfavorable comments made about him by other subordinates or coworkers, and that caused him not to be able to get another job because employers found the comments. In this case, because the company or circumstances in mentioned in web references matched the person, the prospective employer probably could be reasonably sure of finding the right person.

The solution was for the person to use his legal name on his resume and cover letters. Then employers did not find that way in the searches. Of course, if they were clever they could try dropping his middle name.

In my case, back in 2005, I got into trouble with one school where I substitute caught because of what I had posted under my nick name (even though my employment records were under my full legal name). Students actually figured that out, and thought that a fictitious screenplay by me was a poor reflection on me because I was too much like the character who got into trouble. “It’s only a movie” I say, like “Kite Runner.” Yet, school officials feared that even students’ finding the item and knowing it had been authored by someone who worked there as a sub could tempt students into making false allegations against teachers and duplicating circumstances in the fictitious screenplay! There were positive things in the play, however; in one scene, a student saves a sub’s life with a defibrillator. Since this incident, school systems in the county have started installing defibrillators and actually training staff to use them.

It may be legally important, when giving attribution to someone in a news story, to spell their name the same way the source uses it in public.

Bruzzese talks about "The Pew Internet & American Life Project”, which studies Internet use and society, especially with respect to families, children and employment. The organization has a PDF white paper called “Digital Footprints: Online Identity Management and Search in the Age of Transparency”, link here, by Mary Madden, Susannah Fox, Aaron Smith and Jessica Vitak.

The white paper makes some very interesting points, such as that one in ten Internet users have a job that actually requires them to “promote” themselves online, including the values and ideas of the companies or organizations that they work for (not necessarily their own). That would tend to include many executives and managers, teachers (sometimes), and particularly agents who need leads to get business. Imagine the “moral” effect of this on the integrity of financial markets, given what has happened!

The paper also discusses “transparency”, which is its word for the concept that a person’s profile or content is available and searchable worldwide, or, as an alternative, whitelisted and restricted. The paper notes that many people use the Internet (instead of phone book) to locate other people who otherwise would not be regarded as celebrities. They note that they use search engines to find out about people that they may date or even hire. Most individuals are not particularly concerned about the impression others may have of them (which are often colored by the cultural beliefs of others as well as the speaker).
Posted by Bill Boushka at 7:22 AM