More career counselors say that online "self promotion" just for your job is necessary! 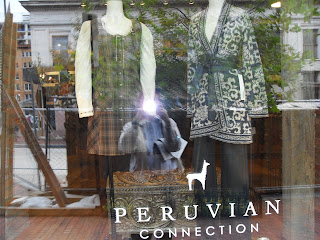 Vicki Elmer puts a new spin on the “online reputation” issue today in the Jobs section (K) of the Washington Post, Oct. 26, 2008, “Aiming for New York? Think Like an Advertiser”, link here.

She somewhat turns the “reputation defense” around and makes it a “reputation offense” or at least a “special team.” She suggests that people should create a presence on Facebook or LinkedIn that supports the job they want, and follow the same idea through with a personal blog. As the Pew Internet Group noted (as I mentioned in a blog entry Oct. 14), a significant portion of home Internet users have jobs that require them to promote themselves online. Still, this is very "job dependent"; the idea that the "average" job seeker must simply look at his or her Facebook or blogger profile as part of or an appendix to a "resume" is a bit "over-revolutionary" and maybe even dangerous.

One problem is that many people perceive themselves as living in more that one “dominion” (to use Clive Barker’s paradigm) at a time, and create a different world for themselves online compared to the mundane physical world that supports them. I’ve done that for more than a decade. I was an “individual contributor” in information technology, and wanted to build up a “second life” based on a progression of political arguments that started with the military gay ban (and that was based on a traumatic even that had occurred to me in college). In information technology, compared to other fields, the workplace culture has long supported the “separate private lives” concept, although in the Internet era lives are no longer so “private” and consulting companies have to wonder how their professional placements would be perceived by clients who find them on line.

Furthermore, I was active on the web in the late 90s using an older paradigm: static sites with flat files that used search engines to build a presence and spread ideas through a kind of “passive marketing.” That was effective in 1998; it may not be so effective today where social networking sites have so changed the paradigm.
There is also an integrity question in “wearing several hats” in public. But, again, a retired person with multiple “parallel lives” in different “dominions” may well look at this very differently that an college student looking for his or her first professional job (especially in a stressed job market). I do realize that, when it comes to the time of selling my ideas in a more focused manner, I will have to streamline my presence and make it structured much more logically. What is changing all this is, as George Soros says, "reflexivity," testing whether I can "walk the walk." There is, certainly in my own speech, a great deal of "irony" and some people will say that this is a difficult, decentralizing and deleveraging time where social cohesion counts and when we can no longer afford the "luxury" of public personal irony or equivocation.

Elmer’s article should be compared to a much more defensive piece by Mary Ellen Slayter in the Washington Post more than two years ago, Feb. 12, 2006, on “Career Track,” “Maintaining an Online Profile -- and Your Professionalism,” link here. That piece had been written just after the media was learning of the “reputation” problems appearing with social networking sites. Soon we would learn about companies like “Reputation Defender.”
Posted by Bill Boushka at 7:11 AM

Linkedin was added to the About.com Top 10 Employment site list with 2 other sites but linkedin is still the only social netwoking site on the list. The 3 newest job sites are:

Good luck to all those searching for jobs.