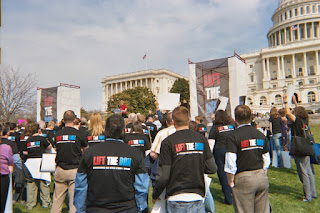 One of the most important contributions that individual bloggers make to the political debate is to encourage transparency. By availing oneself of the freedom to go against the grain of established interests and play devil’s advocate, individual speakers, in sum, pressure major media outlets to report more completely on troubling and dangerous developments that can take a whole society by storm. This is a very important value to me.

The word “transparency” here has a second meaning (compared to the last post). It means that information about major items of public concern is presented coherently enough that many individuals can discern what is going on without necessarily hiring “professionals” or salespeople or agents to serve or “protect” them. I would use the term “issue transparency” for this concept and “personal transparency” for the concept of the previous post.

A good example of issue transparency comes from the recent financial crisis. Practically everyone was aware of the foreclosure problem, and could often see the effects in person in blighted neighborhoods. But few people understood that credit default swaps (based on bad mortgages) could (perhaps when combined with abusive and targeted short selling) trigger a viral collapse of the entire financial and credit system. Even major media “experts” on the various networks never said this. Occasionally individual financial bloggers warned about this, as did a couple of television series. Nevertheless, it should be possible for individuals to track the effect of swaps on their portfolios. Regulators could increase reporting requirements, and systems could be developed to display them by sites like Yahoo!, CNBC or Bloomberg. One feature of the markets is that volatility is driven by extremely short-term thinking, which tends to weed players out (and sometimes people in the real world); whereas, this time, a recovery is going to require fundamental changes in the way people live, or at least major green innovations and associated infrastructure (requiring capital, scare now) to maintain the same standard of living.

Another area where issue transparency matters is in national security, both in the security threats themselves and in the secondary effects on civil liberties. Few people, whether major media companies or individual writers, fully grasped what Al Qaeda was all about until 9/11. But all of us should have understood even then the danger of depending on that part of the world for oil (remember the 70s). Since then, major media outlets have become lax on reporting on the asymmetric nuclear threat, where as individual bloggers and small think tanks warn repeatedly about the dangers of loose radiological materials. Major media have become even lazier about reporting threats like electromagnetic pulse (EMP), leaving a problem like this to strident conservative groups and bloggers, leaving them to appear marginalized. This is dangerous. It’s only by recognizing all the existential threats that proper defensive and recovery policies and measures will be developed.

The “democratization” of critical policy information, connected so closely to the financial and physical welfare of most people, challenges the customary practice in society of going to “professionals” and “experts” for information, particularly in financial areas and particularly outside of health care. That development has an effect on employment culture. Many sales jobs are predicated on developing leads with social contacts, meeting quotas, and closing deals. Success in the practice is seen as reflective of an agent’s “effectiveness” or (for men, at least), “masculinity” but in the culture we have today it seems to encourage superficial thought and cutting corners (hence, “the cheating culture”). Our modern world has indeed grown a clash between personality types: between introversion and extroversion, between circumspection and free-wheeling, between individualism and socialization, in ways that are quite complex. Yet, the ability to present and "sell" complex abstractions (such as financial instruments) to "ordinary people" used to be perceived as one of the "justifications" for a higher and somewhat insular standard of living for those who will wear gray flannel suits.

On the social issues, I have played devil’s advocate with the naïve and complacent beliefs that many people took on regarding their individual rights (and a highly localized notion of “personal responsibility”) in the late 1990s. Changes in demographics, including an older population that is not always able to work, are also related to the economic crisis. To report these changes effectively, I have indeed related some personal narratives, especially from earlier portions in my life, that some people find unsettling and distracting. Yes, I do want to get into the media on a more “professional” basis, whether by web, television or movies (or all of them). While I wouldn’t expect to sell a movie just on the William and Mary incident alone, I may need to use it to make bigger points clear in some larger media effort, because the incident teaches some difficult lessons.

I have two really big concerns. One is that the “free entry” speech model that has so democratized debate may not remain in place forever as advertising gets weaker and as concerns of hidden legal liability shocks emerge (as from the Viacom litigation, for example). It would be a shame if we were forced to run to special interests again to protect us. (Another example that comes to mind is an upcoming case about using fees from non-union members to support union causes.)

The other concern lives underneath the first: we have talked about responsibility as if it were controlled entirely by own our personal choices (particularly, whether or not to procreate) and in a real world it is not. Earlier generations, at least until the 60s and 70s, understood this, and some more conservative religious groups (like LDS and evangelicals) still do. The social pendulum that a few years ago so valued “self-sufficiency” is starting to view that as a mirage. We all are subsidized by others, and we all owe debts to others that reach beyond our ability to choose opportunities. Indeed, while we castigate people for taking on big mortgages and credit card debts, often these are working people with heavy family responsibilities, not always elective, and “home ownership favored” government and market manipulations in the past often forced them out of affordable apartment housing into financially unwise or "irresponsible" condo or home purchases. There is definitely a “pay your dues” mentality coming. There will be increased emphasis on national service, and single people will find they are expected to do the lions share of eldercare and to serve as alternate parents for other people’s children. It’s very dangerous when others expect you to act as their role model or protector, and you didn’t first “consent.” But it’s happening. That’s why issues like lifting “don’t ask don’t tell” (for gays in the military) and gay marriage and parenting equality are important; otherwise glbt people and unmarried adults as a whole slip back into second class status, some of their most fundamental choices affected by the privileged status of married couples with families to have their needs met first (and to be taken care of in old age). This is not necessarily a good time for introverts.
Posted by Bill Boushka at 6:58 AM