The Messenger matters more than the Message (particularly from The Fed) 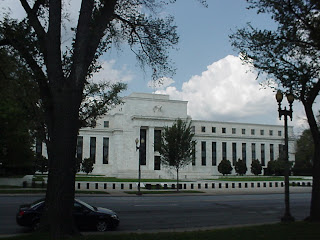 Well, Fed chairman Ben Bernanke gave us a lesson Tuesday about free speech. When he warned that the economy would be weak for a long time to come, as he prepped the world for the international rate cut to come within 24 hours, the stock market indices tanked immediately. The Dow swooned down by 500 more points. That had happened before when Greenspan didn’t keep his mouth shut.

Of course, what he said was technically correct, and a reasonably frank description of what lay ahead (or perhaps beneath, to paraphrase a Dreamworks film a few years ago). I thought, I had written pretty much the same things on my Issues blog for days. Now when I publish, Next Blog might get me some hits for the same material (so would syndication), but it won’t tank the stock market. I don’t have Donavan’s Brain, but maybe Bernanke does. They say the same thing about Hank Paulson. When he speaks, the markets tank.

From a free speech point of view, it’s a matter of who the speaker is as well as what is said and published. Of course, I know, it was Bernanke’s job to say that.

Compare this to another situation. The big boys say something, and it causes minimal disruption. A small fry like me says it, and it’s a “big problem.” I’m talking about a Lifetime Television film “Student Seduction” broadcast in 2004, ironically the day after I started substitute teaching. It tells the story of a female chemistry teacher falsely accused of improper activity with a minor after a male student approaches her. Lifetime is a major media corporation connected to Walt Disney, Hearst, and sometimes Lionsgate.

So, back in early 2005 I post a script on my own website that is a variation of this story with a gay setting (called “The Sub”). Some months later, at a school where I substituted, I get in trouble because of this. I give all the details (they’re complicated) on the July 27, 2007 entry on this blog. But the point, is, even though I am a paean, it’s seen as a big “threat”. Students, remembering my name from class, who find it through search engines might get the idea that it’s cool to falsely accuse teachers, among other things. Of course, the idea has already been explored in commercial film, but somehow remained obscure in the area of cable TV. I had even mentioned the film on my own website as a comparison to my own. All the sudden, it’s a big deal.

That gets to another area. At $13 an hour with intermittent work, I am supposed to be a public role model (like the Fed chairman); and that may be OK except that my perception of role model is not necessarily the same as a school system’s or as that of a parent living deeply within emotive “family culture.”

One of the biggest problems with free speech, especially in a world of universal self-publishing, is the “purpose” of the speech. The “why” becomes as important as the “what” and leads to existential challenges to the speaker that could become quite dangerous to himself and others. This is becoming the heart of the "online reputation defense" problem.
Posted by Bill Boushka at 6:16 PM