"Juicy Campus" stirs controversy at Georgetown University; underscores that "reputation" is in the eye of the beholder; where does this lead? 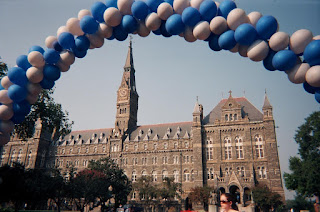 Georgetown University students are asking “JuicyCampus” founded Matt Ivester if he can do more to protect their reputations, according to a Washington Post story Oct. 30 by Susan Kinzie. The story is titled “The Juice, the Whole Juice, and Nothing But the Juice,” link here.

"JuicyCampus" says that its contents are not indexed by search engines, so the risk to students is much less. But some students point out that at a school like Georgetown, many students will go on to sensitive careers like foreign service. Background investigators might check the site directly not find some material funny. Or others might repost derogatory material there in other places that are searchable.

Ivester says the site removes spam and personal information like home addresses, and outright libel. The problem is more subtle. Some people are much more “reputation sensitive” than others. There are a variety of reasons having to do with the jobs they have or apply for, family circumstances, and religion. For example, someone in the military could get into trouble if he or she was outed as gay (although in theory the “don’t ask don’t tell” policy is not supposed to consider rumor—but in practice if often does). A single person in a job or planning a career with little public sensitivity may not care much about a lot of comments. A teacher, on the other hand, might. People in sales or who are paid to speak for others are sensitive to this problem; computer programmers might not be. Some people, as noted before in this blog (as in the Pew Study discussed Oct. 15), are expected to use the Internet to promote themselves for the benefit of their jobs, not to promote their own personal views,

Reputation is an example of what George Soros calls ‘reflexivity”. It can be affected by exogenous and coincidental events that change how simple facts are perceived.

Daniel Solove, a law professor at George Washington University, says that current law gives protecting free speech a lot more weight than protecting privacy, except in situations where the privacy concerns are objective and clear, and even here there are issues (as with websites and data brokers like Intellius that offer the ability to locate people for a small report fee). Add to that the practical reality that reputation is “in the eye of the beholder” and is a nebulous concept, which is why libel lawyers make a good living. But U.S. law gives considerable immunity to free speech, more in the United States than in Britain or in Europe (where libel is easier to prove, as with the British “libel tourism” problem). I have a review of Solove’s book "The Future of Reputation: Gossip, Rumor and Privacy on the Internet" on Jan. 12, 2008 here.

One problem is that relatively trivial or insignificant details about someone can stay online at no cost for years or now decades, and could affect the person’s opportunities if he or she lives or works in a reputation-sensitive area.

The concern is that political pressure from people in sensitive areas of society could gut the third part immunity provisions (like Section 230), making it much riskier for companies to offer social networking sites or publishing services, ending the “free entry’ system for speech that we have come to count on today (and probably ruining a lot of Internet companies). People will propose or demand measures like bond postings or mandatory insurance (as with autos) to cover the “risk”, and that would shut most amateur speech down quickly. Imagine the consternation that a single state initiative or referendum trying to require something like this could cause.

Another concern is that the Human Resources world has not established “best practices” in doing “Internet” or “search engine background checks” ethically. Internet services were never set up to encourage this practice, but that has become a practical result.

As noted before, companies like Michael Fertik’s “Reputation Defender” have been set up to handle some of these problems.

The Post has an earlier article on September 2 “JuicyCampus Expands Its Libelous Gossip Machine”. (Check for “JuicyCampus” [one word] in the Washington Post’s search box; a number of stories and items come up that should be reviewed.)

"Dr. Phil" has covered, with some degree of ratings-driven sensationalism, the online gossip problem recently several times (check my TV reviews blog, Oct. 28, which dealt with cyberbullying, as well as postings Sept. 8 and Jan 15 on “Internet mistakes” or “busted on the Internet”). The online reputation problem drives some of the plot lines of the popular CW show “Gossip Girl.”

How do we get a grip on all this?
Posted by Bill Boushka at 6:12 AM

Hi
You have a nice blog here!
In case you are interested in chess:
My site:
http://www.chess.f1.cc
Im happy to do link exchange with your blog also...