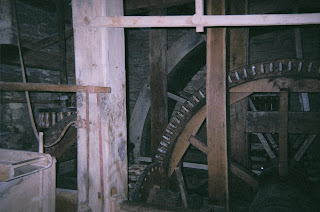 On Wednesday, Oct. 29, Margaret Atwood wrote a summary column “A Matter of Life and Debt” on p. A29 of The New York Times. (Link). She correctly pointed out our loss of focus on paying back debt as a measure of traceable personal responsibility, and as a subset of our general notion of social justice. In the financial crisis, the securitization of mortgages isolated the lenders from contact with borrowers and created the illusion of a pyramid of free rides. This is a total reversal from the treatment of debt in past generations, which generated horrific happenings in many 19th Century novels. (Remember, high school kids do need to study literature for a reason!)

In broader terms, the acceptability for many people to live beyond their means, and the social acceptability of debt, certainly builds up negative karma, but it also undermines a sense of social justice and stability. With some people, it will tend to create the impression that no private property ownership is really meaningful any more, and invite more crime. She writes with hope that there will be some restoration of morality, of a personal sense that others are harmed by excessive consumption, and that something like a common good matters. Otherwise, she warns, “we could have social unrest on a scale we haven’t seen for years.

But debt, in the broadest sense, involves a lot more than fiat money. As she points out, the bigger concept is some underlying sense of faith in justice.

Since the 1960s, we’ve tended to emphasize a group approach to justice and civil rights, with good reason. We’ve made a lot of progress in overcoming the disadvantages that we would burden one recognizable group of people with relative to others.

But when I was growing up in the 1950s, the “individual” responsibility for “fairness” and justice was the core moral value. Today we talk about accepting responsibility for one’s chosen actions (consumption, having babies, consuming substances). But in the 1950s there was an underlying assumption that everyone owed something back, beyond the scope of one’s choice, for the privilege or living well relative to many people who could be worse off. That seemed to be the heart of morality, even if then there was not as much conscious awareness of hidden interdependencies (although the New Testament feeds us with examples everywhere).

The most obvious example of this mindset might come from the military draft of the era, along with the issue of deferments, and the growing awareness that the risks and sacrifices inherent in defending freedom in uniform (or perhaps even at home in services like police, fire, and dangerous jobs) were not shared equitably. There was a then unchallenged assumption that you owed loyalty to your family and for caring for other family members. Yes, if you had a baby you were responsible for it, but having children (within marriage) was also a way to carry out responsibility that existed already. And you didn’t count on following your own path in life unless you proved you could take care of other people, when needed, even if you didn’t have your own children.

We changed our minds about this, although not as completely as everyone thinks, with the civil rights and then gay rights movements born in the 1960s. There were a couple of reasons. One was that the patriarchal “family system” did invite and maintain conflicts among groups (whether religions, races, or countries). Another is that we needed to nurture individual talent (especially brain power – the geek ) to win World War II and prevail in the Cold War. We learned that we needed to allow more self-indulgence and obsessiveness to survive as a culture. A side effect of this freedom was unawareness of the hidden unwilling subsidies from others, and a tendency, even within families, to let the less able or competitive individual people drop on the floor. That left plenty of new ways to generate resentment.

Still, we now find that hyper-individualism, extreme capitalism, and market fundamentalism, all of these things, tend to isolate the individual from any genuine sense of interdependence, that anyone needs to really lay claim on what is really his. As I have found myself, “reflexivity” (previous post) involves others calling one’s bluff, forcing one to face how one will, at some point, respond to others in a real, immediate sense. When no one is willing to do this, then a sense of despair and lawlessness really can take over. If everything that is mine is absolutely mine, then nothing is.

When persons have access to wealth that they cannot justify with their own ability or with productive interactions with others in an immediate (including familial) setting, they may be gaining at the unseen expense of others, possibly deferred into the future until some kind of reckoning. That’s why we have with bubble problem, and why basic assumptions about rules or confidence and even social justice can change suddenly. Societies actually have to accept individuals to share some of the uncertainty that goes with productivity and increasing standard of living. Societies do get concerned with morality as seen in terms of individual “karma”, and sometimes societies invite totalitarian ideologies that have rationalized the end results as “moral” (sometimes in religious terms). Or sometimes the market itself responds. Issues like equal rights and responsibilities for gays (the military, marriage, parenting) and to the modern opportunities for self-expression with free entry. Indeed, the free market itself could impose a “cultural revolution.”
Posted by Bill Boushka at 7:33 PM