Family values -- even for singletons 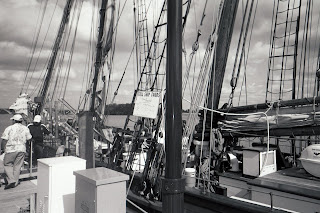 At lot of the advice maintains that marriage creates a bonded couple that is more than the sum of its two parts. And there is plenty of material, as in the recently rewritten book “Love & Economics: Why It Takes a Family to Raise a Village” by Jennifer Roback Morse (reviewed yesterday on my books blog) that convincingly demonstrates that marriage is essential to raising children who can become productive and morally accountable adults, with a proper perspective on “self-interest.” Morse talks about the basic process of child socialization in the family as a natural given, but, still, marriage is a socially institution, manmade, to attach men to the children they father, but, moreover, to being able to support other people in the family and community in a much broader context.

On the other hand, there is now (and has been for a few decades) a substantial population of singles who, individually at least, live productive and expressive lives without the socialization and emotional commitment (and support, which often amounts to pampering) of marriage. As I’ve often written, there is a lot of cultural tension among people with different mindsets as to individual expression and family commitment. There is a general impression that successful singles compete with people with family obligations, and exert an influence that tends to de-incentivize and destabilize other families.

Yet, probably fifteen years ago, about the time that Clinton took office, we generally imagined marriage and children as a private choice, even if we insisted that people take responsibility for the children they actually have individually.

During the past several years, especially in a time where external problems make family cohesion a more critical survival issue for everyone, it has come to become apparent that stable families are “everyone’s business.”

Morse, in her book, took aim at people who resist allowing others to become close to them except on their own terms. She talks about some family relationships as not chosen and expected of everyone. She characterized loners or people who insist on their own agendas in life as “difficult to deal with.” It’s possible she was referring mainly to people already married who do not remain loyal to their marital obligations when their partners become less than “perfect”, but it seems as thought she could be referring to everyone who resists social receptiveness to others.

It seems as though she is suggesting that everyone, even if not specifically in a marital relationship with children (I suppose that could apply to same-sex couples) accept the idea of belonging to a Family, and the Family, as an entity, is more than the sum of the individuals who make it up. That arrangement protects some individual members (such as the elderly and disabled) from the competitiveness of hyper-individualism. It also, in theory, gives marital sexual intercourse a lot of power over other family members, even adult children until they marry themselves and set up their own families. If that were enforced, the legal and social ramifications could be considerable.

But it often happens in practice that unmarried adults are expected to take responsibility for others in a family. Even in terms of individual karma, everyone owes something back for having been cared for when helpless himself (as a baby). Eldercare is the most common "not chosen" responsibility, and it is growing as people live longer, often in a frail and dependent condition. But other circumstances occur, such as raising a sibling’s children, or, as in a Dr. Phil episode, a young man who may give up a kidney and possibly a baseball career so a brother can have a transplant. Blood relationships, even those not chosen, carry a lot of weight, and the practice of modern medicine can create new situations for people that in the past would not have come up.

No wonder, then, it can seem that people may be a lot more secure and comfortable when they are willing to see their own value and life courses through the “family” rather than their own personal decisions. They are relieved from “second class citizen” evaluations of others and even themselves. This whole line of values seems to be becoming more credible as our society is stressed with unknown dangers, some of them related to asymmetry and some to sustainability. It’s all quite disturbing.

I do understand that “family consciousness” and love has meaning that I have not personally experienced much as an adult. I’ve had to deal with it at certain times, including recently. Nevertheless, I don’t accept the idea that it makes failure to be able to accomplish anything on you own all right, even if it was because of the needs of others, or because of something that “couldn’t be helped.” I believe in preventing these huge problems in the first place.

There is certainly some logic in believing that if families, extending in this sense to incorporate even those adults who remain childless, took care of each other, and if those individuals who excelled always took care of the family members who didn’t, there would be less need for government programs. The “freedom” aspect of society is what allows the most able to “advance” into higher standards of living, but they must bring others along with them. This view describes a gradual process that does seem a bit utopian. And many people, me included, would find it quite coercive, diluting the sense of self that I have come to treasure.
Posted by Bill Boushka at 11:10 AM