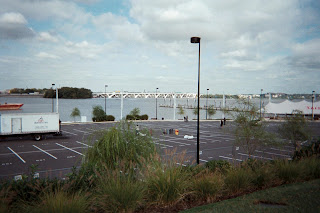 I want to reiterate a critical “meta-point”, relative to my blog posting Sunday about Media Bloggers and insurance.

When I post a line of argument about a political or social problem, I try to list all the relevant lines of thought and points of view, and come up with novel observations that most people in the major media or advocacy organizations are often not willing to make. For example, while discussing “don’t ask don’t tell” or gay marriage, I go beyond the usual simple arguments (like immutability) and consider older ideas of citizen duty (or “uncertainty” assumption) as they would apply to people who perceive themselves as “different” (and I hope not just “special”).

The willingness of an individual to argue material this way and self-publish it does provide, I think, a valuable check on the special interests, advocacy organizations and lobbyists who are paid to protect the specific or even “partisan” interests of their own constituencies. It is a way to implement some intellectual honesty into the way we debate issues (even the financial mess on Wall Street, so much a preoccupation today).

I can recall an occasion in August 2001 when a paid speaker and financial “expert” predicted a 35000 Dow by 2005 at a corporate sales conference. He said what we was paid to say. He has “credentials,” I don’t. But look at what really happened.

The most common way that people participate in political speech is collective: advocacy organizations write self-interested positions in baby language, and members of the public are encouraged to mass email politicians the same message written by organizations or lobbyists. To my way of thinking, this is insulting!

There is, in the minds of some people, a cultural or even moral downside to my notion of self-publishing on political matters. An individual speaker who can say just anything (even if “just legal”) may not have the same commitments (particularly relative to the family”) to provide for others as those who are more “partisan” or who are willing to show, at least in public speech, more “solidarity” with the real needs of others in their group. (Think, for a moment, about the tone behind Barack Obama’s references to the “middle class”.) Furthermore, speech, while facially constructive, might still be construed as being set up to tease people with excessive commitments relative to their own abilities – merely by being “there” all the time to be picked up by search engines. True, nobody makes you read it, but “it’s there” and someone else will. There is, perhaps, a need to earn “the privilege of being listened to.”

As I’ve noted, Internet self-publishing, in combination with search engine technology that has been very effective since about 1998, has the potential to reach a larger, and unlimited (apart from censorship in less democratic countries) audience, even more than printed books and magazines. In the past, industry trade publishers were expected to exercise extreme due diligence, and newspapers and television networks had definite standards for professional oversight or journalism. Of course, despite the claims of the journalistic profession that it must adhere to objectivity, this tends to make most trade publication likely to fall under the influence of special interests. In my personal life, before the Internet age, I heard the phrase “abuse of the media” more than once.

Self-publishing is related to social networking, but they are not the same thing. Social networking typically involves setting up “friends lists” and “published” material (however risqué) tends to circulate among the friends, much as in a listserver. Of course, it can leak out and become a problem even here, as with “reputation defense.” But the concept is substantially different. Social networking sites typically encourage members to limit their postings to circumscribe lists. Blogging software also offers this possibility. But what is common if for bloggers to want their posts to be searched and become available worldwide, instantly after publication, and perhaps be self-syndicated, so as to have maximum political and “asymmetric” effect.

This poses certain risks. But first understand that some risks do exist even within a “whitelist” environment for distribution. For example, some legal books say that a false defamatory statement about another party is libel if given to just one other party that understands it (say in a corporate email); it doesn’t have to be distributed worldwide. In some legal contexts, “publication” can consist of distributing material to just one other person. That legal notion has been around for centuries. The practical issue, however, is likely to be the unlimited distribution (and syndication) through the World Wide Web, or sometimes through P2P.

So far, the percentage of bloggers who get into real legal trouble seems to be very low, partly because of the number of bloggers. Nevertheless, there are some scenarios, perhaps theoretical or hypothetical and not yet encountered in the United States, that could get bloggers, other associated people and service providers into catastrophic situations. [Distant hint: see the posting on "libel tourism" on Sept. 1 2008 on my Major Issues Blog, although Congress can harmlessly fix this particular issue if it has the will.] I won’t go into detail here (leave that for a John Grisham-style novel). This sort of gets back to the “uncertainty” problem of the last post. You can’t have innovation (and the opportunity to force the system to become more honest, with all the best intentions) without some unpredictable “risk” to self, companies, and sometimes unaware other people. As we know from the bailout mess, the public doesn’t always understand new technologies or mechanisms until after the fact or until, as they said on ABC’s “The View” this morning, “the party is over.” In view of these observations, it seems to me that the possibility of mandatory insurance or bonding could develop rather suddenly, if there were to occur some unforeseen calamity somewhere. That could lead to new kinds of “private” censorship and bureaucracy, essentially eliminating the societal political benefit of asymmetric speech, which helps expose corruption in the special interests. That would be too bad.

Someone who predicates a “second career” on this kind of “second life” activity may come across as uncommitted to others, or perhaps as some variation on an “Uncle Tom.” Indeed, because of the asymmetric publicity, the person is excluded from some ways of making a living (as I’ve noted with discussions of blogging policies and “reputation”), and might be challenged to prove that his speech can become economically “profitable” and thereby accountable in a numbers-driven world. Other interests may want to challenge the person to be willing to accept social responsibility in more conventional settings and with respect to more conventional norms. Then the person (like me) must resist in order to maintain personal integrity and avoid those existential traps that have their own Schwarzchild radii.
Posted by Bill Boushka at 8:34 AM