Review: how an "amateur" news operation should be segmented 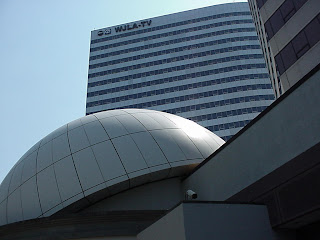 How should semi-gonzo journalism work? I coin that term to characterize what I would like to see the major media outlets do better. Maybe the program that comes closest to the style I would like to see happen and become a part of is Anderson Cooper 360 on CNN (whatever their blogging policy, a couple postings back). The gonzo part comes from the fact that some personal stories and some embellishment, some little grace notes, add some color, some musicianship, and help the viewer connect the dots as to what is happening.

Right now, I have four “sites”: The blogs here, then doaskdotell.com (static), billboushka.com (experimental, with a new Wordpress blog on the law), and a “resume” site johnwboushka.com for information technology jobs use only. Actually, the latter use is getting rather obsolete. These sites have developed over time as technology changes. I don’t keep all my eggs in one basket; FDIC makes me spread it around.

But how should a comprehensive news interpretation site be set up? I’ve probably gone over this before, but it’s time for a review, and a new view.

One part would be a set of relatively static essays on topics, categorized in various ways, overlapping perhaps “to connect the dots.” These essays could be organized around a book. However, with time, the view of a particular issue (say “gay marriage” or “don’t ask don’t tell” or “online reputation defense”) may change with political and social changes. In the past, I’ve updated essays like this with additional footnotes (as with the “running footnote files” for my books) or endnotes on supplementary essays. In time, this approach becomes unwieldy and leaves a sloppy impression. It may be better to rewrite essays, or arrange multiple versions (on one subject) in a numbered or date sequence. Wordpress may make this easier than Blogger can. In the past, this portion of my work has been organized more around historical evolution (from the books) than actual content.

The next part would be the set of media reviews, of films, books, plays, music events, and some television events. Most of these (except perhaps some of the television) would be static with the media organized into logical groupings around some theme. With Wordpress, film reviews could be placed in multiple groupings.

The last portion would be a blog, heavily categorized (as in Wordpress), and linked to the static essays and reviews. The blog entries would include brief discussions of news events (hyperlinking to multiple original standard journalistic sources), and announcement of new media reviews. The media is being handled in a manner opposite of what I do now, where many of the permanent reviews are on Blogger because the Blogger setup has encouraged that; but the way I do it now is not as logical (or as stable) as it should be.

One other portion of all of this, as I have discussed before, would be the “political thought database” where arguments and counterarguments around various topics are listed in MySQL tables. Since Wordpress can be implemented in MySQL, such a database could be set up with Wordpress, although this would be an unusual application of blogging software.
Posted by Bill Boushka at 6:43 PM