Karma comes about as civilizations grow from little building blocks 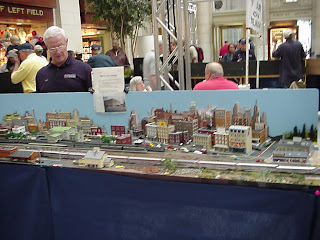 In the pre-Internet era I used to love board games, not just chess, but those that were based on maps of places. One such game from the 1950s was Star Reporter (Parker Brothers, I think). There was a board of a fictitious country with about a hundred communities. “Reporters” hopped around by “planes, trains and automobiles” and accumulated points for scoops. The game would end with a bit of “disaster capitalism.” I also recall that the central city of the game was called "Urbana", not to be confused with the town near Frederick, MD: 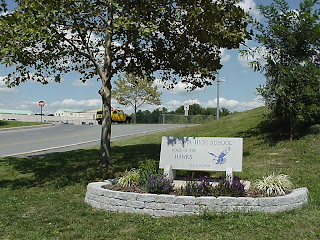 I also remember my model train set, a Mars train, HO, with a stream engine, three freight cars and a caboose. I even remember getting it for Christmas at age 3, one of my first memories at all. It fit onto the green ping pong table (itself undersized) and I could build little phantom communities with blocks, and tissue paper snow storms. In time, I would experiment with more complicated layouts.

In Ohio in summer, we built "baby play" communities along a ribbon sidewalk that ran from the house to the privy, past a small grape “orchard.” I’ve already talked about our “field of dreams” at the farm. Of course, girls played with doll houses, and even at Mt. Vernon (Virginia) there is a big toy replica of the real estate.

Now, let me jump ahead to apparently another topic, sci-fi movies, and especially the way “civilizations” on other planets are often depicted. Typically (even in the Star Wars movies), they are relatively small in scope and geographical reach. Sometimes there is a huge central Megapolis, and some outside countryside, perhaps a bit like Britain, perhaps like Walt Disney’s Magic Kingdom. Sometimes, as in Dune, most of the planet is desert and uninhabited. The action takes place in a relatively small area.

In relatively small communities, people tend to accept a certain “natural order” in the way they have to do things, especially within the family. One’s outlook often derives just from the relationships within the family and a few other extensions. Risks and duties must be shared for everyone to survive; hence the whole idea of daily chores that everyone accepts. Complementarity is vital, and the intimate relationship of the parents sets the tone for everything around.

Civilizations, however, grow more complicated in time. There are even computer games on Xbox to demonstrate the process. Surrounding tribes may compete, and families really have to hunker together to survive. Hopefully, however, a market economy develops and communities learn to trade and cooperate. They must balance their internal cohesion with the need of its members to venture outward and learn new things from other cultures.

As communities become more connected, the economic and cultural contributions of an individual to civilization apart from the immediate family become more important psychologically. At first this perception involves men; but often eventually all adults and technology enables people to vary from their original gender-related responsibilities within the family. War and conflict tend to renew emphasis on people performing in relation to their gender and to concentrate on protecting others in their immediate surroundings. Peace and economic prosperity, on the other hand, enable psychological surplus, mobility and specialization.

The kind of individual mobility grows with technology. First it is ground and air transportation, exploration, and new relationships and living arrangements, which may not involving having or evening raising children. Then, as with the Internet, other kinds of instantaneous global communication can occur and offer self-expression.

Science fiction can weigh in on this in process various ways. The “Metropolis” model of another planet suggests a world in which most people live “local” lives, but a few people are tested and initiated into urban mechanisms that allow them additional influence over others, and individualized transcendence beyond their own “reproductive responsibilities”. This could have derived from an original aristocracy or monarchy and become a kind of meritocracy that can kick people out as well as take them in. It’s easy to imagine the plot ideas that can evolve. (Along these lines, I remember that National Geographic once proposed an intriguing model as to how intelligent life might evolve on a smaller planet close to a red dwarf, with one side always turned toward the Sun, and a very structured geography.) Horror and sci-fi novelist Clive Barker (in “Imajica”, 1991) imagined that various planets could come into connection through a process called “reconciliation”, and that Earth could become incorporated into this connection of “Dominions”, with Heaven or the afterlife simply being the First of these. New kinds of instantaneous communication and teleportation among the dominions take place through “magic” (that is, multi-dimensioned branes or worm-holes that Barker called the “In Ovo”), with the posing of unprecedented moral and political problems that now, in retrospect, seem to reflect those posed today by Myspace and the Internet – the novel was published just before the Internet became public. The reach of civilization turned into a kind of Chinese puzzle, looking for a Theory of Everything.

With a stable and geographically and especially topologically expanding civilization comes the modern idea of personal freedom and individual sovereignty. Individuals expect to transcend the limits of their original circumstances. But in that very opportunity comes the greatest moral dilemma of all: it’s impossible to explore the world and promote oneself globally without depending on some sacrifice of others that one never even becomes aware of.

That’s how I perceived “moral” issues when I came of age. I came to perceive events like sharing risk through military service, and eventually sharing unwanted intimacy in the family as “duties” that have to be expected in civilization, and came to perceive that anyone who evaded them was a kind of second-hander. The buzzword for this concept is "bad karma." As I noted before, a lot of anti-gay attitudes relate to this “moral construct”, and a lot of the ideas, particularly of the Catholic Church, seem designed to get those otherwise disinclined to become part of the emotional framework of the nuclear family and share intergenerational responsibilities, which now include eldercare as well as raising children. And part of the construct reinforces the social supports that many married couples believe they need to remain stable and actually provide lives for their kids. This is all a bit of a flip from the simpler idea (today) of accounting only for one’s own actions (like supporting the children one “chooses” to have). But a globalized world presents social and religious conservatives with a need for some kind of moral ideology, because simpler worlds simply enforced shared responsibility as simply a matter of local family survival.

Much of the obsession with “public morality” does indeed have to do with managing and manipulating sexual intercourse (and empowering it when it occurs within “marriage”). But in a really “domionized Imajica” one wonders about “non-sexual” (or “androgynous”) kinds of “promiscuity” (Barker’s Pie ‘oh’ Pah alien as the paradigm), where one has infinite reach and audience with no accountability. Perhaps eventually the market alone corrects that without political or legal structures. I’m surprised I haven’t (yet) seen another book by George Gilder (“Men and Marriage”, 1986) on the construct.

One can imagine new ways of managing this issue, of communicating the need to share responsibility but suggesting that gay marriage and adoption (as well as the ability and expectation of serving in the military or some equivalent service) could become ways of carrying it out (somewhat Jonathan Rauch’s thesis) for those of us who do not conform. A general name for the concept could be just “pay your dues.” It recognizes that some portion of moral action will always live outside the immediate influence of markets. Personal freedom must never be taken for granted.
Posted by Bill Boushka at 1:13 PM