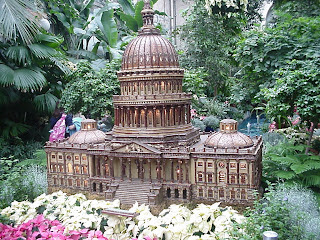 Members of Congress themselves face a confusing set of rules regarding World Wide Web activity that show the difficulty of the legal and political system in keeping up with the open nature of web use. Matthew Sheffield has an intriguing article ("Congress misses the mark on Web rules") on this problem in the “Poli-Tech” analysis column in The Washington Times, July 31, 2008, p A4, Nation Section, link here.

Current rules in the House and Senate forbid posting of non-campaign materials on any site that does not end in house.gov or senate.gov as appropriate. It is permissible to have campaign profiles on Myspace or Facebook (and have “friends” for that purpose) but not to use these or any other external tool (Blogger or Wordpress) or any similar Web 2.0 or 3.0 resource to blog or communicate about legislative issues, outside of the two established Congressional sites.

However, Michael Capuanco (D-MA) asked if it was permissible to embed a YouTube video in a congressional site on house.gov. YouTube itself permits this (“hot linking”) within certain terms of use, even though in many cases other sites with copyrighted materials do not. The problem is a Catch-22: the Congressman would first have to make a posting on YouTube itself, which would be forbidden. There are also questions about congressional use of sites like Digg or Mixx.

There are proposals to establish Congressional vetting committees for the Web, but this would obviously invite bias or corruption. Furthermore, members of Congress do not have to seek approval for letters to the Editor or op-eds in newspapers, when the publication takes place by the newspapers and when there is no self-publication.

So the rules in Congress would be equivalent to an employer’s banning of associates posting for personal purposes or for expression of political beliefs, even from home, on social networking sites or personal blogs. But, as I’ve noted before, employers may start believing that they need to expect their key persons to have their online presence professional “managed” for reasons having to do with online reputation with clients.

Matthew Sheffield is a creator of Newsbusters.
Posted by Bill Boushka at 6:35 AM

Labels: The web in government