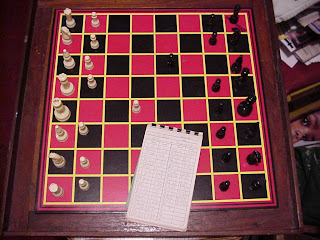 Oh, will I ever become active in tournament chess again?

I haven’t played a rated game since 2000, but as a Life USCF member I still have a rating – it prints on my Chess Life mailing label, as 1752. If I were to enter a random tournament right now, I would play about as well as the Nats have recently. I’m just not competitive, since I have migrated away in other directions (and been pulled away). Being a competitive tournament chess player is like fielding a competitive major league team, eh? (See my posting Sunday.)

I played my first rated game in George Washington University team matches, back in the fall of 1964. I lost my first three games, as I recall, and then got a draw on the white side of a Nadjorf Sicilian with White, and then beat a Dragon by castling Queenside and storming Black with pawns. (I hadn’t learned the niceties of the Yugoslav Attack yet, believe me.) The first tournament that I ever entered was in the spring of 1965, at a place called the Washington Chess Divan, which in those days was near Capitol Hill. I lost the first three games (like the Nats) but won a “Sunday doubleheader” to finish 2-3. I somehow remember a Steinetz Ruy Lopez and an opponent actually allowing a pin against an uncastled king and the loss of a piece.

I played some rated matches with other players in college of my own strength. One match in 1965 ended 2-2 with Black winning all four games, decisively. It’s common with weaker players (or players with midrange ratings) for Black to win more of the games, because it is often White who is the first to patz. With some players at GW, chess became an obsession. One player, the star of the team, started failing his courses and wound up getting drafted and going to Vietnam, although he survived. (We played postal games.) Another enlisted to avoid the draft and actually did very well in languages and in military intelligence.

I wound up in the Army myself after graduate school, and actually played a lot of chess. I helped organize post tournaments at Fort Eustis, and got “orders” to play in the Armed Forces Championship in Fort Meade, Maryland (in the back yard of the National Security Agency, half way between Washington and Baltimore). In that tournament, I won my only game ever with the Black side of a French Defense Winawer variation where White goes pawn grabbing (very few White players accept the challenge in practice) and I remember that the game ended as a 70-move endgame race. Later, in December, in a tournament in Newport News, VA, I would defeat Armed Forces Champion Robert Powell on the White Side of a Kings Indian where he varied and sacrificed an exchange, and seemed to be winning, when I came up with a sham Queen sacrifice that won the material back (with mate threats) and entered the endgame a piece ahead. I remember the crowd around the table watching a master be defeated by somebody with a rating 600 points lower. But it happens. In any given game, anything can happen, just as in the NFL. Bill Goichberg, who ran so many Continental Chess Association tournaments in hotels all over the country in the 70s, used to say, “Only your own mistakes can beat you.” Is life really like that? Not quite.

In the 1960s I was already beginning to notice that Chess, while pretending to emulate war and the ideas of Clausewitz, provides, with its 16 pieces and 64 squares, a paradigm for the moral ideas of life. Let me digress a moment. I recall that Joe Steffan, in his book “Honor Bound” (leading to the debate on gays in the military), gives his account in his junior summer at sea as a midshipman on a submarine, and talks about playing chess games, but never says how good he was at the game. I believe that service academies used to teach the game; maybe they still do.

There was a moral debate growing in the chess community about opening theory and “style” then. Queen Pawn openings were thought to be more “solid” and a chess player’s maturity depended on learning to play more “solidly.” That view turned out to be way too dogmatic over time, but I began to understand how many things in life evolve in a manner analogous to “positional play” in Chess. In chess theory, we have debates about when pawn centers are strong, or simply overextended an vulnerable to attack (as in the Grunfeld defense). We have debates about the relative value of a Bishop and Knight (rather sounding like the controversy over the Knights Templar). Sometimes, there are questions about when center pawn majorities outweigh wing majorities. Or when is an isolated pawn a strong battering ram, or an endgame liability? Going into retirement on a sound foundation is like trading into the Engdame. But some of the biggest moral dilemmas in life correspond to the chess concept of zugzwang, or compulsion to move. One can slide into a situation where one is not immediately threatened but where one runs longtime social risks because of karma, and become pinned down, unable to move without harm (like being in a bind in a chess game). The obvious example, of course, is the basic king-and-pawn ending where the losing side must move his King away and the pawn in promoted (this is set up by having the “Opposition”, which again is something akin to moral karma).

The idea of “zugawang” is showing up in subtle ways in modern chess. In the late 1960s, an opening called the Benko Gambit became popular, because in many variations White (up a pawn) can’t find anything constructive to do and deteriorates. Recently, in some offbeat variations of the Sicilian (and a related position from Bird’s Opening), White has experimented with an early Queen sacrifice, for two minor pieces, where Black is constantly in practical zugzwang afterwards.

The other main period of my life where I was active in tournaments was in the early and mid 1980s while living in Dallas. During that time, the Dallas Chess Club moved from East Dallas to Forest Lane up north near EDS. For two or three years I did pretty well, and got my rating almost to 2000. Sometimes I would beat a 2200 player in a tournament, usually because he got overextended, and it seemed, though I tended to hover near .500 ball (the tournament system tends to force that to happen), that more than half of my wins came as Black, even against higher-rated players. One time I got a draw with Black with a 2400 player with a piece sacrifice that netted a perpetual, shortly after the opening (a Saemisch Kings Indian). But another time, in a notorious and published game, I lost in about 17 moves with White by having my Queen trapped without being directly attacked (on the white side of an English). The score is here.

In the early 1990s, after coming back to the DC area, I got active again for a time. A couple of times I beat “Experts” on the white side of a Kings Indian, both times by forcing the exchange of light-square bishops. It’s amazing how often players allow that. In 2005, I assisted the First Baptist Church of the City of Washington DC with a one day chess tournament from DC schools. That would be a good thing to do again.

I had thought about starting a Chess Openings blog, but I’ve wondered about copyright issues, if I simply reproduced analysis made by others. It’s amazing that 40 years later openings don’t seem to be played out, despite computers. It would seem that software engineering paradigms for computers playing chess could be related to other efforts to teach computers to interpret images, a recent subject of controversy in the security industry (and subject of a video by Luis Von Ahn that I expect to discuss in more detail soon).

I show a score book of some games from the 1960s in the picture. Many of the paper scores have been lost over the years.

I discussed Bobby Fischer’s career in January on the International issues blog, here;
(also check that blog for Sept. 24, 2007 for a posting on Garry Kasporov; I discussed Kasporov’s “How Life Imitates Chess” here. )

Note on the United States Chess Federation: The link is above; it acronyms uscf appears in unrelated domain names. In the 1960s, it was located on 11th St in New York City, across the street from the Cast Iron Building where I would live from 1974-1978. 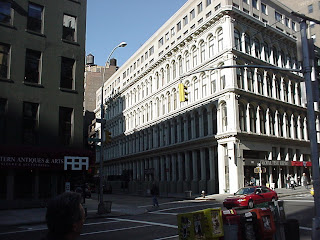