Sustainability 301: no, it's not organic chemistry 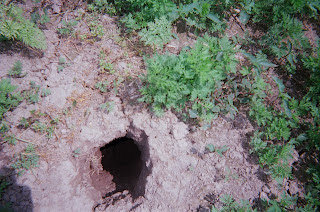 In the past few entries, I’ve talked about the pressure that the current crisis in energy and global warming can put on the free choices of individuals. This pressure can come from the free market, or it can come from government, or from labyrinthine combinations of these with social and familial forces.

It’s well to remember that most totalitarian political ideologies make a lot of defining “morality” for the individual, in terms of expected “sacrifices” and socialization. And in various ways, sometimes authoritarian systems are able to achieve the illusion of stability and even sustainability among the masses for a long time. The Soviet Union maintained the appearance of stability for much of its masses for decades, and even did this with some decentralization. At the same time, however, it inevitably maintained its elite class (Communist Party membership) and did many horrible things, resulting in much pollution and destruction of the environment, not to mention awful things done to citizens. (Stalin killed more people than did Hitler.)

Authoritarian societies also vary considerably on whether procreation is a moral obligation, but they often take a strong position one way or the other. China is interesting in its one child policy. But looking back to the Maoist Cultural Revolution of the 60s, we saw one of the most oppressive examples of moralism put down on to citizens in history, as intellectuals were forced to become peasants and many did not survive. Yet, in the leftist 70s (in some urban areas at least) it was hip for some people to point to the Chinese system as an example of virtue. So today surviving baby boomers can take in regular media broadcast stories about daily life in North Korea and Myanmar (let alone much of the world dominated by radical Islam).

I recently watched the two indie directed by Canadian Gregory Greene, “The End of Suburbia” and “Escape from Suburbia”. (These were reviewed July 4 on my movies blog; check Profile.) Both films take the concept of “peak oil” more seriously than global warming, but tell the viewers to resign themselves to lower standards of living as cheap energy get tapped out. “Power down” your lives, they say. There’s talk of living a lot more locally, and going back to more labor intensive lives, especially producing food and goods locally. Some of this could be done in place, but a number of people were moving out to the countryside (familiar?) to live out their purifications.

Local self-sufficiency has occasionally gotten attention as a juicy moral topic ever since the Arab oil shocks of the 1970s (and even in scenarios of what could follow a nuclear war, which gets into frank survivalism of the Stephen King “The Stand” variety), and this time around the talk carries more sting, because we have global warming considerably complicating the task of generating enough sustainable energy from alternate sources to maintain a “globalized” civilization.

It’s a little hard to imagine the dismantling of global, hi-tech and wired culture, and the separation of people into communes after requisite news fasts. Maybe a transition to a lower energy culture will be traumatic no matter what we do. Of course this sounds like the denial the filmmakers talk about, but I am hardly resigned to the idea that innovation cannot go a long way to solving our environmental and energy problems.

But one aspect of decentralization might be limiting the number of people any one individual has access to with his own talents. It rather sounds like the Age of Exploration in reverse. It implies that everyone will have to learn to “love” others regardless of personal choices for commitments. Proponents of these ideas have utopian ideas about how smaller communities would govern themselves, but my own experience is that every community, even small ones in circumscribed neighborhoods, tends to generate its own internal political struggles, with some people “in” and some people “out.” That’s why I personally welcome globalization. Apart from the challenges of energy and climate change, globalization gives me both physical mobility (travel) and communication (self-published expression, rapidly reaching many people globally). I have expected that the opportunities thereby offered would outweigh the economic instability caused by globalization to old-style paternalistic jobs. Until 9/11, certainly, that had proved true for me personally. But my own life paradigm, which means broadcast expression and extreme selectivity in persons that I will choose to be close to, depends on a stable political and technological infrastructure. This had actually worked until the 9/11 period and had given me some of the interpersonal world that I wanted. And the freedom of this meant I didn’t have to experience jealousy or give into the games of the “soap opera” world.

Some sustainability challenges have certainly made me question the “morality” of my own approach. For one thing, you can’t increase life-spans of older people in such a way that they need constant personal attention (because of frailty, dementia, or other such permanent medical issues) while at the same time indirectly encouraging people to have fewer children (which is what our society has done) without exposing many people a new “family responsibility” shock with eldercare. It gets beyond the eldercare issue as the need for more adoptive parents and for childcare grows so much that people even in my situation are expected to be receptive to taking other family responsibilities that a decade or so before they would never have imagined being faced with. This sort of thing would really become an issue in smaller communities. Of course, as I’ve analyzed before in my blogs, this all gets back to the real point of “public morality” and “family values” including the older objections (especially of the Catholic Church and of most evangelical Christianity) to homosexuality, regardless of claims about immutability. That is, certain modes of intimacy, connectivity and family responsibility need to be shared by everyone.

In a decentralized world, libertarian theory would mean that each autonomous group could set its own mores, as long as people were free to move to other groups. What a decentralized, low-tech world would do in practice is confront me with a “be here now” kind of life with relatively little choice of expressive intimacy, and the forced acceptance of other people on their terms. It would not be a welcome outcome.

Again, we need to get to work.
Posted by Bill Boushka at 4:28 PM