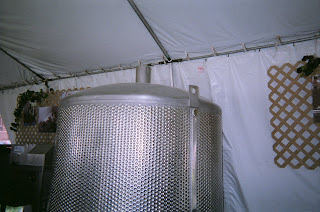 This morning, the NBC Today show discussed a recent study showing that most American couples without children are happier than those with children. That sounds ironic in that NBC has just started its hit reality show “The Baby Borrowers.”

This finding apparently surprised a lot of people. “Happiness” (and, in the story, “interest”) seemed to go down some time after the birth of the first child, given all the pressures that couples face because of the extreme demands of a child. The show mentioned the pressures of "the family bed" and "attachment parenting" that some couples experience or try. Happiness improves, according to the report, when the oldest child can leave home successfully, to go to college or work. There is no question that having “successful” kids can eventually make a marriage happier.

The report indicated that people marry five years later now than they did twenty years ago, and often delay having children longer.

The NBC story also indicated that American society is individually very competitive and not particularly family-friendly. This observation seems to relate to "radical individualism" and an emphasis on personal sovereignty associated with the "me generation." Workplace culture with respect to family may contrast to practices in western Europe, where there is usually paid parental leave available. Even so, as noted often lately, the United States has higher birth rates than does Europe, where a slowing native population is becoming perceived as a serious demographic problem. Those who talk about the family friendly workplace should read Elinor Burkett’s 2000 book “The Baby Boon: How Family Friendly America Cheats the Childless”. But another problem is that modern technological society offers young adults other ways to build identities of their own apart from family activity.

The Today show also reported this morning that many grade school children lose much of their math skills over the summer vacation and have to be retaught. It’s unclear whether computer savvy kids will hold onto their skills better; older children probably would, but younger children may never gave the foundation in how math actually “works” until they do a lot of it by hand. Sylvan Learning Center was mentioned as offering a lot of games that help retain math skills.

That recalls what I used to do with a couple of friends at around age 11 or 12 or so in Ohio (in the days that the Cleveland Indians were contenders every year and played in that old notorious stadium on Lake Erie, and the Senators were hapless losers in the clapboard old Griffith Stadium). We used to build board-game stadiums out of cardboard, and then lay them out in farm fields (one boy actually build a fence to enclose a farm “field of dreams”). I suppose that’s pretty good for learning geometry skills. For example, kids could ponder why baseball outfields are almost never in the shape of squares. Sports problems provide plenty of good “word problems” for math and physics.

A favorite quote of mine is this: “A certain scientist, Galileo’s contemporary, was no more stupid than Galileo. He knew that the earth revolves, but he had a family. And when he got into a carriage with his wife, after accomplishing his betrayal, he reckoned he was advancing his career, but in fact he’d wrecked it.” That comes from the Russian poet Yevtushenko, “A Career,” translated text for last movement of Shostakovich Symphony #13, London CD 417261, performed by Dallas Turtle Creek Chorale with Dallas Symphony in April, 1987.
Posted by Bill Boushka at 6:38 AM