Photography in museums (and discos): policies, and common sense 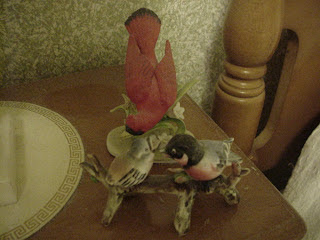 I thought I would make a note about my own photos on these blogs.

Some of the photos are taken in museums, parks, reservations, or various public facilities of scientific or historical significance, often with many exhibits, some of them having enclosed photographs or artwork and written documentation on various signs.

In general, it seems most museums and parks that are publicly owned permit indoor photography, even flash photography. Generally, when photography is permitted, I presume that it is all right to display personally taken photographs on the Internet.

Some photographs have an obvious connection to the text of a blog entry, and some have no connection and are just decoration. Care is taken not to display photographs that would suggest a negative association (with some entity mentioned in the blog text) that is misleading.

Some pictures show museum renditions of important historical events, sometimes tragic or horrific in nature. Occasionally these are shown on blog entries if appropriate for the subject matter, in order to convey to the regular visitor a sense of coverage of major historical events (including 9/11, OKC, etc).

Some museums do ban photography of many indoor areas, and some ban photography for visiting exhibits. Museums often ban flash photography where original art items are shown, to prevent distraction of visitors and possible long term damage to items. Generally, photography is banned in areas where films are shown, because the motion picture industry bans all photography in auditoriums because of anti-piracy concerns. This policy has sometimes been carried to absurd lengths. In Arlington VA, in 2007, a Regal theater had a patron arrested when she shot 20 seconds of “Transformers” on a Camcorder, and a theater employee noticed. Likewise, most indoor professional musical concerts and stage drama performances ban indoor photography. I always respect the ground rules of any venue as the property owner announces them.

I’ll interrupt my argument here for a moment to recall a spring 2001 visit to the Guggenheim in Bilbao. Two floors had visits that consisted of mazes to negotiate. I suppose these could have made intriguing photos if allowed. The top floor had an art decco fashion exhibit. In May 2007 of my drama blog, I discussed my visit to the Andy Warhol Museum in Pittsburgh. One visiting exhibit on global warming did bar photography.

Bars, clubs and discos these days seem to allow cell phone photography. Any visitor should realize that he or she could, however inadvertently, wind up in an Internet photo.
Theoretically, some performers at discos and some celebrities who visit might be able to claim “right of publicity” for some dissemination of their photos on the Internet. My own practice is simply to practice “common sense”. I don’t “out” celebrities for visiting gay bars (they sometimes do).

I don’t publish photos or any other material that I can reasonably believe would actually drive away business from the establishment, unless there is some unusual problem that I need to “expose” and can prove factually. This does not happen often. In most cases, residents of other cities probably find the coverage, in words and pictures, or an establishment will give them a reason to be interesting in making a visit and providing the establishment some revenue.

Flickr has a page discussing photography restrictions in museums here.
Posted by Bill Boushka at 7:22 PM