New York case with "Room 8" tests blogger anonymity, and right to seek publicity when drawn into legal actions by others 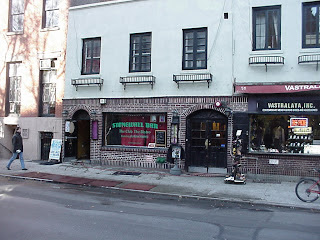 There is another issue brewing now with bloggers and the interrelated issues of anonymity, discovery, and reporter shield. A website called “Room 8 New York Politics” which publishes posts about New York politics, was subpoenaed and required to identify an anonymous blogger named “Republican Dissident.” The website’s own account of this is here. and the Grand Jury subpoena (from January 2008) (PDF) is here. There is some confusion about how the district attorney behaved and how much he knew. But the subpoena originally contained a requirement of secrecy, that its existence not be disclosed.

It’s true that sometimes legitimate law enforcement actions must take place in an atmosphere of confidentiality, as is well known from all the debate about FISA. However, if a blogger is forced to remain mum about an investigation that he or she somewhat inadvertently precipitates, that removes one of the blogger’s strongest weapons, asymmetry, the chance to go to the media and become a new “celebrity.” Whether this ought to be a “fundamental right” probably presents a good ethical controversy.

In this case, the DA withdrew the subpoena and gag order when the bloggers threatened litigation.

The New York Times story leads off the Business Section today, July 15. The title is “An Uneasy Intersection of Bloggers and the Law” and the story is by Jonathan Glater, with the link here.

Glater points out that many cases like this are civil, rather than criminal, but the need for confidentiality often seems crucial to the complaining parties.

One major concerns is that websites like “Room 8” that encourage anonymous postings would disappear if they could not protect the anonymity of their contributors.

I allow anonymous comments on my own blogs (and will post anonymous emails about my content when appropriate) and I could not guarantee anyone that I could even identify the speaker if I had to.

Another related observation comes to my mind with respect to “reputation defender” problems. In the school situation that I described on this blog July 27, 2007, I could never get any facts from the school system or school. I pieced together what happened from evidence on server logs and from tangentially related news stories about a possibly related incident. There is a practical problem in employment-related incidents with bloggers that “due process” is not available and that the blogger will not be able to learn the details about the real complaints about his or her posting, unless there is a formal lawsuit with full discovery.
Posted by Bill Boushka at 8:19 AM