Another web entrepreneur, this time at George Washington University 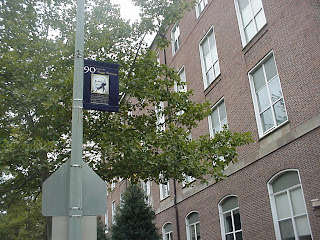 The Washington Post has a “Value Added” story this morning July 28 (page D03, Business Section) about the success on the web of George Washington University college student Matt Silverman. The story says he makes in the five figures with several revenue-earning web sites. The story seems to combine elements of a couple of controversies recently addresses on this blog: “getting noticed” (or “famous”), and business models based on web advertising. The story is by Thomas Heath, is titled “A Collegiate Entrepreneur’s Mantra: ‘Understand Your Audience,” link here.

Heath mentions several of his ventures, which go back to the days in the eighth grade. The most interesting to me was BestViral, which appears to accumulate a feed of “viral videos” as they appear on the web, drawn from different sources (not just YouTube -- this morning he has an SNL video, for example). They are items of fairly wide spectrum importance, in order to draw an audience. I suppose that makes a point about the “Gossip Girl” concept, which seems to suggest that fame (or notoriety) still matters the most within a somewhat circumscribed group of social contacts. It ain’t that way in the real world, folks. Even on Comcast broadband, I did find BestViral a bit slow to respond and load this morning.

One of his most successful sites is ChipotfleFan (this site has misspelled parked domains on the web trying to draw traffic away, and McCaffee isn’t flagging them yet – I had to gumshoe a bit to find the right one). This site is based on Chipotle’s restaurant in the Chicago area where he grew up and often ate. Chipote’s own site right now has a customer warning about Jalapeno peppers and a link to a PDF document explaining corporate policy!

Matt’s sites do suggest that often the most successful sites on the web commercially focus on rather narrow areas of consumer interest – things people really want. That is, a lot of people like to cook, and a lot of people like recipes. That reminds me of a self-published book award given a few years ago to a book on the Dove’s Nest Restaurant in Texas.

Of course, Matt’s story makes an interesting comparison to that of Cameron Johnson and Aaron Greenspan, both recently covered on my books blog.

I cover a wide range of seemingly unrelated subjects because I think it’s important to see how they all connect. I graduated from George Washington University (Matt's school) myself in 1966 with a B.S in Mathematics and have recently looked at its MEd and teacher licensure program, although I didn't "go for it."
Posted by Bill Boushka at 5:38 AM