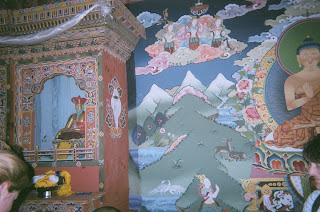 There is a new moral buzzword, sustainability. Recently I reviewed (on the books blog) a new opus by Peter Senge (“The Necessary Revolution: How Individuals and Organizations Are Working Together to Create a Sustainable World”) that talks about sustainability, mainly in terms of thoughtful activism within the workplace. His basic premise is that the industrial age, that has made our standard of living possible in the developed world, must evolve into a new green age, with some different parameters of growth.

But a pretty obvious question arises. Should sustainability become a personal moral value or virtue? Should one be expected to examine the pattern and significance of one’s own actions and expressions in terms of sustainability? Could the concept of personal sustainability allow others (eg "society") to redevelop the notion of "the right way to live" (the way churches do now) and impose it on non-conformists in anti-libertarian fashion?

I think that a lot of the notions about “public morality” that we endured before the 1960’s civil rights movement and increasing demands for individual freedom have to do with what we thought made society “sustainable.” We often put these ideas in religious terms (and still do). But we now know that the old standards of “Victorian morality” etc. did not make for a permanently sustainable world. But by the 50s a view had evolved, that family-based personal mores were a necessary condition for stable freedom, even if diplomatic, political and moral collective leadership were also necessary to reduce or eliminate group injustices.

In fact, many people will say that the world (with its pretense of religious virtue) of the 1950s simply enabled one group of people to exploit the labor of others, while consuming and exhausting resources, and that this continues now. If we look back at what we learned about comparative government back in high school civics, we remember that totalitarian ideologies were often based on ideas of “permanence.” Nazi Germany predicted a thousand year “reich” that lasted a dozen years. Stalinist Communism (and Marxism) talked about a state that eventually withers away after the long term establishment of the “dictatorship of the proletariat.”

Nevertheless, there were concepts in our “public morality” of the 50s that do seem applicable to sustainability. A couple of them were striking. For example, men were expected to prove that they could defend and provide for women and children (not just their own spouses) before they were respected by the world. The Cold War, followed by the Civil Rights revolution and disenchantment with Vietnam, taught us that brains and “geekiness” could be more important than brawn (a bit of the thinking behind Richard Connell’s famous story “The Most Dangerous Game”) and encouraged more emphasis of individual development of intellectual skills. (Actually, that had been true during World War II, but we hadn’t caught on to what Alan Turing had taught us.) However, until the 70s, at least, there had always been a strong moral current that people should become responsive to the real needs of others and incorporate taking care of others as a prerequisite to any notions of personal success. The idea that personal risk should be shared (as a “rite of passage”) had been built into the draft, and the “unfairness” of deferments drove many of the “morality” debates of the 1960s. I remember these well during my own coming of age and I am struck that many of today’s teens and young adults have no concept of what this meant.

The modern world has given individuals unprecedented capabilities to live their own lives individually as they chose, regardless of the needs of others or of hidden interdependencies on others. It allowed some people (like me) to be “choosy” about their social experience. Originally, this experience consisted of physical personal mobility and then the ability to live alone or in various other arrangements (besides the marital family) in some sort of economic parity (able to buy homes, for example) which was not the same thing as “equality” that we demand today. I took advantage of this gratuitously on some of my rent car vacation trips, but usually lived in high density urban areas and required relatively little commuting. With the Internet, global self-expression, outside of the ties of family and business reporting structure, became possible, and I took advantage of that. I developed my own "way of life" and it became productive, but I fear that it will not be sustainable for today's or future generations, which may have to accept much more socialization.

All of this suggests that I lived in and counted on a world where one’s “work” or “experience” or “expression” or even possessions can become more important than “people as people” (a favorite phrase of my father a few decades ago) – especially accountability to people. That sounds like it can be wasteful (sometimes) and destabilizing. It suggests a world that now appeals to more introverted personalities and discourages personal dependency, when actually it involves hidden dependencies. The “moral” consequences of all of this sometimes get criticized in belief systems like that of Luddites. Or, for example, consider the Amish, who shun all modern technology that allows “independence” and who believe that their world is sustainable and stable. Of course an Amish outlook could not save the world from an asteroid hit, were as a technological society could save itself, or perhaps even move to another planet some day.

That brings us to the “cultural war” and “family values.” Now, in the past couple of decades, we have gotten used to hearing about family values in taking responsibility for your own acts. That is, raising children you parent (hopefully married first) and protecting yourself and others from STDs. But older ideas about morality turned this around a bit. There was a presumption that you owed your society (and especially your parents and family) biological loyalty, usually through having children and raising a family yourself, or at least by being supportive of those who did. In a sense, that sounds like the essence of “biological sustainability.” The strengths of marriages were thought to depend on the kids, even when the kids became adults. You can imagine the logical conundrums that result, and I’m surprised that someone like Dr. Phil doesn’t go deeper into these. (Or maybe I’m not surprised.)

You know where this leads – the contentious areas of “gay rights” and today, gay marriage. We all hear the complaints that gays renounce any responsibility for procreation in marriage and having and raising children. Except that many gays want to adopt and sometimes do. (Listen to Rosie O’Donnell’s story.) But having or at least taking the responsibility to raise children (even other people’s) can give one an obvious personal accountability to future generations, and an incentive for “sustainability.” Likewise so does a system that encourages childless people to remain loyal to the goals of their families, even though such an archaic or tribal value system raises painful questions about equality, privacy, personal sovereignty and individual liberty.

What does seem at issue, in part, is how much responsibility we should feel for other people’s children in all of our actions. That sounds like a genuine sustainability question.

Furthermore, because of demographics, eldercare is becoming a big issue, making demands on people who did not have children of their own and have never had to be responsible for other people who need to depend on them. In some cases, adults caught in this situation wonder if they would be better off if they actually had children, ironically. The demographic problems (fewer children and longer lives, and shrinking pensions and challenges to social security) certainly make an economic and lifestyle sustainability problem

One can think of a lot of the crises of the past few decades: the oil shocks of the 70s as well as the recent oil price runup, the AIDS epidemic, terrorism, the threats of new kinds of pandemics, and the enormous problems on the Internet caused by individual abuse (spam, for example, and viruses) – all of these relate in some way to “asymmetric behavior” where the actions of a relatively small number of people can have enormous impact on the world that seeks to liberate itself from the stifling pattern of political and familial loyalties in a spirit of individual liberty. Now we see that global warming (as well as other novel challenges like sudden pandemics) could force us to recognize our hidden interdependence on each other and accept others into our lives (even in somewhat intimate circumstances) in circumstances far from our own choosing. The future economy may not support the asymmetry of personal expression, with relatively little formal accountability or reportability, as it has so far.

We do see signs, on shows like Oprah, of examples of what personal sustainability ethics might involve. “Going green” could demand a lot more sociability and less convenience and perhaps less media dependence than what we have come to take for granted. It could demand more preparedness. It could demand the contingent skills that earlier generations demanded of everyone, in terms of raising children and caregiving, to help “socialize” the “risk” for those who do “choose” to have children. Philip Longman (“The Empty Cradle”) may be right in maintaining that modern society encourages self-absorption and disables some of the special continuous intimacy needed for having and raising children in families.

"Sustainability" as a moral precept may very well complicate or at least enrich the way we think about the relationship between choice and responsibility. It may force us to accept the sharing of common responsibilities and goals that transcend personal expressive choices, even in family matters. The concept is certainly a familiar concept of most religious faith. It concerns "do's" as much as "don't's".

I may have come of age at the right time for my own karma after all.
Posted by Bill Boushka at 2:37 PM