News stories on policy debates: who the players and lobbyists are really matters 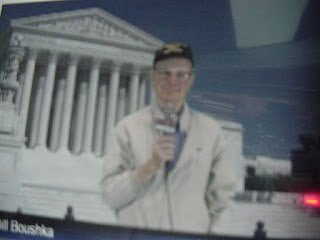 Many times on these blog, including the Major Issues blog, I summarize proposals on public policy issues made by various think tanks and “K Street” lobbying organizations. Usually the major point of a posting (on a topic like health insurance, energy policy, or Internet speech and public schools) is to state a position on how to solve some particular problem (like provide universal health insurance). It’s important to know who stated the proposal, and whose “special interests” are being represented, if any. But there is a limit to how concerned the typical Internet visitor is about the internal workings of the many organizations inside the Washington Beltway (or the “bandits” just outside, for that matter). What matters to me is to list and organize a set of proposals (as in a database) and compare them on merits.

The details of how these proposals get generated matter to some people, however. Typically, a newspaper story mentions a number of organizations and individuals, and it sometimes takes some additional digging to find out who the players really are. I got a comment that I had misconstrued the organizational background of one of my postings recently. I can see why it matters sometimes. Organizations have various standings with the IRS or in tax law, and may not like to be misidentified, even by “amateur” bloggers. There are major differences, for example, between political action committees and “political caucuses” (often important in many cities with LGBT issues), which may be run by essentially the same individual people. Sometimes there are concerned about disguised foreign lobbyists.

Another situation that happens is that sometimes stories or law firms report that a particular law can result in a particular adverse result. For example, a law firm’s website suggested that the laws in a particular state allows school boards to fire teachers for inappropriate Internet speech outside of campus. In a sense that was true, but the text of the law did not say that. This was the law firm’s own interpretation of what courts would probably allow. Something like this can become more serious as Internet conflicts (over personal Myspace profiles and the like) grow and as employers might want to regulate them.

There is a short film at the Newseum in Washington called “Getting it Right” about errors in journalism, which sometimes happen because of time pressures. But sometimes what matters is the little details of a story, to alert but sensitive portions of the potential audience.
Posted by Bill Boushka at 1:33 PM