DC area violent storms and tornadoes: yes, they happen here, and sometimes the mountains create them 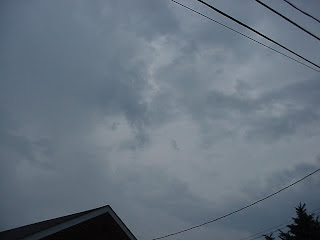 So, it can happen to anyone. Yesterday, the DC area had it’s taste of Midwestern “tornado alley” weather. Severe storms started in mid afternoon and didn’t get out of the area until almost midnight. I don’t want to trivialize what happens in the real tornado alley. We had a few funnel clouds and damage, but nothing like whole towns being wiped out, like Greenville KS (2007) or Parkersburg, IA. However, there had occurred severe damage in Suffolk, VA, on the tidewater in April, and just NW of Fredericksburg in May.

The geography of the Mid Atlantic area is supposed to provide some protection, mainly the mountains. But yesterday, the mountains probably contributed the storms. A very long stationary front sat from East to West, reaching almost to the Rockies. Low pressure to the north of the DC area brought in cool northwest winds, and summer high pressure trying to move up from the South brought up moisture laden winds from the Gulf. The winds collided along the front and produced shear and rotation. The thunderstorms, as they formed over Indiana and southern Ohio, first looked horizontal on the weather.com map. As they moved east they had to rise over the highest portions of the Eastern Continental Divide, around the Allegheny Front and Spruce Knob areas in West Virginia (a bit away from the stripmining, thankfully). The thunderstorms at first weakened, then they started to reform in the Shenandoah Valley. This time they ran more S to N (SW to NE). As they crossed the Blue Ridge, they encountered the highest Central Section (around Old Rag, Stony Man and Hawsbill) and seemed disrupted as they climbed over. At the same time, Atlantic moisture from the SE was colliding with the eastern faces of the Blue Ridge. This time, several times, the mountains, rather than protecting the DC area, encouraged the violent storms to reform, and “bounce” and race across the area with breakneck speed. I was lucky enough to have power and Internet connection most of the time, and I could watch this happen three times last night on the weather.com maps. They kept on forming as long as the moisture laden flow from the SE collided with the cooler air coming over the Blue Ridge. It has happened before, resulting in catastrophic floods on the eastern side of the Blue Ridge.

Picture above: I could see the rotation in the clouds when I took this picture. Hard to see, but a tiny funnel was trying to form around 7:30 PM, northern VA. Most funnels did not come down to the ground. 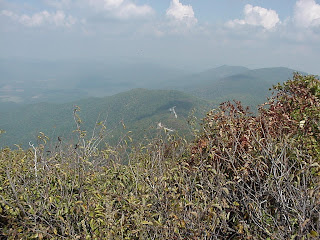