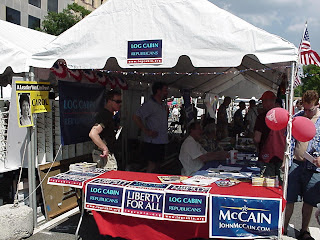 “Bubble” was used as a title for two very different independent movies recently, and now it marks a Washington Post series Alec Klein, Zachary A. Goldfarb. It’s called “The Bubble: Anatomy of a Meltdown: The Credit Crisis.” The series appeared June 15-June 17 and the three parts were called “Boom” “Bust” and “Aftermath”. The best link for the full series is this.

The bigger question is, of course, whether capitalism – especially “extreme capitalism” – naturally leads to a succession of bubbles. We had, at one time, believed we had built enough safeguards into the system after the 1929 Crash and Great Depression with measures like federal deposit insurance, pension guaranty, and social quasi-entitlement programs like social security and Medicare. This, of course, started largely during the New Deal and was accelerated under LBJ’s “Great Society” of the 60s.

Moralists, however, will always insist that there will always be imbalances when some people can promote themselves (financially or culturally) on the backs of others. In some ways, the oil price shock (and the oil embargo and first price runnups in the 1970s) reflect that.

Indeed, in 2004, Princeton professor David Callahan argued that extreme capitalism has been accompanied by a breakdown in personal ethics associated with a heightened sense of individual competition and short term pressures, as in his book “The Cheating Culture.”

In the late 1970s and early 1980s it became fashionable for single people to buy condominiums, and there was a mini real estate boom then, even given the inflation and high interest rates following Jimmy Carter’s moral expansion. This was particularly true in Texas and the southwest, where real estate speculation and flipping boomed. Suddenly, Saudi Arabia started increasing oil production in the 1980 (under the pressure of Reaganomics, maybe) and oil prices fell. As an indirect result, real estate was found to be overbuilt in Texas prices fell, leading partly to the savings and loan scandal (exacerbated by fraudulent land flipping in some areas around Dallas and Houston). I was caught by this: I sold a condo for a small loss, and then had to handle a situation where an unqualified assumption failed. The "rolling recession" of the late 80s and early 90s, however, seems mild compared to today’s subprime crisis.

Consider the Internet dot-com bubble. Much of it may have been explained by the expected efficiencies in retail and consumer shopping, and the economies of scale for companies inherent in broadband (and outsourcing). Those facilities appeal particularly to the idea of short term earnings results. But there was also the novelty of immediate global personal broadcast. That seemed as sudden and surprising a boon as space travel might have been. In my case, I thought I could “monocast” a startling social and political concept, and the idea that someone like me could do so might stimulate a belief in future profits from Internet publishing businesses as whole. But a lot of times, the effect of an idea is social or political and extends over a long period of time, and only makes money later when there is a potential big payoff (like a movie).

I recall at a company meeting in 1999, the CEO said our stock price was weaker than it should be because the company name didn’t include “dot com”. That turned out to be silly, as dot-com started falling apart in 2000, well before 9-11. Nevertheless, a paid speaker at a sales conference in August 2001 predicted a 35000 Dow by 2005. That was also “silly.”

The next bubble would, then, be the “second” real estate bubble, as well analyzed now. The problem seems to be, that the particular kind of “securitization” that hid the real risk from normal investors was not regulated. Real estate, they say, is “real” because it is finite. Well, you can build condos in three dimensions (especially in New York City -- Donald Trump knows all about “air rights”). I wonder how we (or “the market”) would price real estate on Mars if we terraform the planet and can actually move and live there.

And now, people like George Soros talk about commodities (especially crude oil) as being in a bubble. After all, oil prices cracked before, in the 1980s. This time, the underlying fundamentals seem to be different: global demand from competing developing countries is much stronger, and the political volatility from non state actors is much more critical (in a potential “next 9/11” sense). An underlying problem seems to be the pricing of commodities in dollars, and the idea that, by not properly paying for the Iraq war and consumption patterns, Americans are living beyond their means, with the dollar falling. Ordinary Americans, after all, fell for those bad mortgages. We spin and manipulate each other too much, and have stopped learning how to produce real wealth.
Posted by Bill Boushka at 8:59 AM