Bloggers ride and get "off the bus" of political campaigns 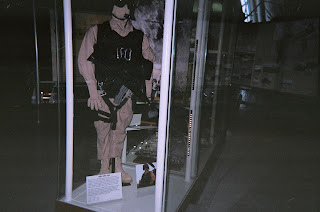 Citizen and networked journalists are certainly attracting the attention of the political campaigns. This morning the Washington Post ran a front page “Media Notes” story (by Howard Kurtz), titled “Amateur Campaign Blogger Scoops the Pros” about Mayhill Fowler, who caught Bill Clinton in diapers when she confronted him in South Dakota right before Hillary’s appearance anticipating the South Dakota Primary. The online version of the story is called “Blogging Without Warning” and appears here.

The “master blog” that had published Mayhill is called “Off the Bus” (as if getting of a campaign bus, plane or train -- or spacecraft, some day -- for a major political candidate) and is sponsored by the Huffington Post and New Assignment, apparently receiving contributions from 2500 people. The main blog URL is this. The blog, taken as a whole, is a bit more complicated than many, and is set up to be retrieved in various ways since there are many contributors. The blog entry in question was entered June 2 and is here. (“Bill Clinton Purdhum”) where there appears an audio file of Bill Clinton’s discussing the Vanity Fair article by Bill Purdhum. That appears to be the piece “Bubba Trouble: The Comback ID” (link here. Purdhum’s Vanity Fair blog is here.

The Post story maintains that Fowler admits that she has “no journalistic training” and spent effort with trying to get books and novels published, apparently by regular trade publishers. “I’m impelled out there and get the truth of the matter.” Ditto. I’m under the impression that bloggers are often “paid” to cover specific events, like political campaigns and sometimes criminal or civil trials, sometimes with an adversarial purpose in mind. What seems necessary to me is the even bigger picture, of all the issues, and how they fit together. Yup. Connect the dots.

Other media sources (like CNN 360) indicate that Bill Clinton didn't realize that Mayhill was a journalist when he talked to her. He should have realized she could subsequently blog. Perhaps he doesn't realize that bloggers are journalists (read Electronic Frontier Foundation), although given all the issues that came up in his own administration, that surprises me.
Posted by Bill Boushka at 10:17 AM