"What Happened?" McClellan's actions do raise ethical questions about public speech on a payroll 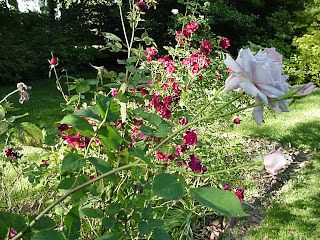 I can recall in elementary school as we waded through third grade readers like “Streets and Roads” and counted the pages of each story assigned (and how many of them had pictures – they got fewer) that the payoff was at the end, “what happened.” That’s the last act of a screenplay, isn’t it – the payoff.

Such is the title of Scott McClellan’s book, an opus that was to be released May 31 (Saturday) but leaked. “What Happened: Inside the Bush White House and Washington’s Culture of Deception” published by Public Affairs. There are other unrelated books on Amazon with that title. Yes, I’ll order it soon.

But there is a fifteen minute video on MSNBC, available here (yes, watch it!), where the author does his oral exam defense. He says he was misled on the Valerie Plame leak, and, worse, that President Bush selectively released previously classified intelligence, mostly about Iraq, that he had been unaware of. He says that the president goes on “gut instinct” and not intellect. No surprise.

The problem for him is that he was hired as a pitchman, as the press secretary. His paid job was to speak in public for the administration. He was paid to convey the administration’s views, not his own. And here, I can say, “I told you so.” As far back as 2000, I’ve posted essays on my websites and blogs that, if you are paid to make decisions about other people or are paid to represent other people’s views in public, you lose some of your right to express your own. The ethics of whistleblowing laws is not the issue. It’s the fact that you “inherit” some responsibility for your employer, just the way a java class can in an object oriented software application. So, if you don’t want to share that burden, the honorable thing to do is quit.

Then, it is OK to write a book. Of course, you have to honor confidentiality agreements, trade secrets, and not divulge classified information, even after you leave. Even then, there can be a problem. When I wrote my book in the 1990s largely (but not exclusively) on gays and the military and a previous draft, I had to tread carefully because I worked (although as an individual contributor) for a company that sold life insurance to the military. Finally, after a merger, I “transferred” away from the problem. But these things really matter.

A somewhat related issue that that employers sometimes form PAC’s and invite employees to participate, although reputable employers do not pressure employees to do so. But there is a story by Amy Gardner in The Washington Post “E-Mail Backing Connolly Raises Questions: Consultant for Firm Asks Its Employees to Donate to Va. Congressional Candidate,” link here. The company is SAIC (Scientific Applications International Corp.) and Connolly is said to work part-time for SAIC in public relations. The story goes on to analyze whether the email could have violated recent campaign finance reform laws (McCain-Feingold), itself a subject of controversy a few years ago because of the concerns over blogging. But the bigger problem is the idea that someone at a large employer would believe that pressuring some employees is the right way to advance public policy. If you “work for somebody” they own you, just as in the soap opera world. Good bye to thinking and speaking for yourself.
Posted by Bill Boushka at 8:10 AM