Newseum weighs in on First Amendment protections for students (and teachers) 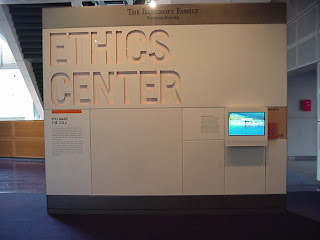 As I have noted recently on these blogs, the recently opened Newseum in Washington DC has an effective exhibit on the First Amendment, and contains panels on student speech rights in public schools. It also exhibits the “Bong Hits 4 Jesus” banner from the case that went before the Supreme Court. (Oct. 26 on this blog; more details on my COPA blog here. Of particular concern in the exhibit is the possibility that a diary or blog depicting a school incident as “fiction” could be perceived as a “threat” by school system administrators. I had reported this on this blog April 18, but have found more specific information there in a visit yesterday. This information affects a specific situation that I had myself in the school system, as I will show below.

The Ethics exhibit, on another Newseum floor, offers a quiz on the First Amendment for both adult and student issues. That quiz appears alongside some "ethics in journalism" "games" on nearby terminals that I got around to visiting Monday. One particular question on the T-F quiz concerns whether a school principal may censor the Myspace or Facebook page of a student. The Newseum’s answer is that, according to the First Amendment, a school administrator may not, unless an actual disruption to security or the learning environment has occurred at the school, or, presumably, a credible prospective risk that one will occur exists.

It’s reasonable to presume that the same reasoning applies to teachers as public employees. I’ve discussed before the first amendment rights of teachers on numerous blog postings. I’ve also discussed an incident that I had in 2005 on the July 27, 2007 posting on this blog (see archive links).

According to this reasoning, it’s reasonable to assume that there must have occurred a complaint to the particular school from a parent after I had subbed there, after the parent or student found the file in question at home, probably with a search engine. To fire me, the school district would have to believe that (and this invoked the “fiction” problem discussed in detail on the July posting) my presence in the school system represented a credible risk. From the server logs, as I noted, I saw that the school system looked at numerous other files on my site (including the files that I had actually listed on the sheet of paper) that would establish a context for interpreting the meaning of the specific file that seemed so troubling. I believe that they determined that no credible problem existed.

I had thought that my bringing up my site to an interim teacher in relation to a newspaper editorial that day had somehow pushed the “threshold of credibility,” including identifying me as the author of the file in question (when I did not know yet that they had seen it and been upset by it). However, they obviously were aware of the file before and obviously could have verified that I was the author to any reasonable satisfaction.

There is a long story of missed signals that I won’t replicate here. But the end result is that eventually I taught another semester (in 2007) but was barred from that school. I then stopped for other reasons (including longer commutes and gas prices).

That brings up another issue with the hiring of unlicensed short term subs in many states. Often, administrators have absolute discretion to delist subs (“do not send” or “do not use”) from their schools with no due process and without cause, on the basis of any vague objection whatsoever. The most common reasons for this happening would be (besides not following lesson plans) inability to maintain classroom order and discipline (“poor classroom management” is the euphemism), often a problem with disadvantaged or younger students who may not respect subs to begin with, and complaints about personal Internet activity, and this “reputation defense” problem seems to be becoming rapidly more common. Typically, short term subs do not receive performance appraisals or constructive feedback, because of the abbreviated process with which they have been hired, and are not entitled to “due process” as normal contract (and union-protected) teachers are. First Amendment arguments are not relevant to the absolute discretionary authority of administrators over their own schools with subs.

I had discussed this on the major issues blog (before my Newseum visit) in February, here, and I discussed major media coverage of this issue on that blog April 28, 2008 here.
Posted by Bill Boushka at 1:48 PM