Bill of Rights 2 Symposium: What would it deal with, in view of current issues? 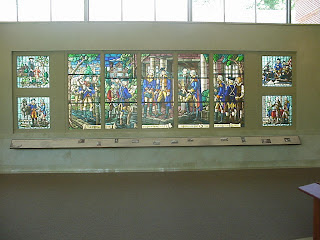 Visitors to my blogs and sites may get the impression that I am the messenger of the “anti-Gospel,” that I am conveying all the bad news and dangers (multiple “inconvenient truths”) that I see around and cataloging them.

I do think it’s necessary for “the public” to get a clear handle on what is going on about all of these issues (global warming, pandemics, terrorism, demographics, economics, energy, health care, etc) without having to depend on a religious, familial, or even political authority structure to spoonfeed it to everybody. The Wikipedia approach is certainly important, and I’ve tried to develop a way of cataloging the way people argue their opinions on these issues. I do think that the “Opposing Viewpoints” concept of that recent book series from Greenhaven, or even older publications such as the comparative government comparison columns as far back as the 1950 World Book Encyclopedia, are all efforts in this direction.

I do think we need to focus on the question of maintaining individual liberties in the face of these challenges. I’ve said before that we could contemplate a “Bill of Rights 2” and a “Bill of Responsibilities” concurrently. So I propose (I could say, “move”, if blogging had to follow Roberts Rules of Parliamentary Procedure, which it doesn’t) that a foundation set up a major public forum on this question. I think that the foundation could comprise law schools of a number of universities. If such an effort were to be mounted, I would like to see the colleges and universities which I have attended or with which I have had some connection in the past organize it. These would include William and Mary, George Washington University, the University of Kansas, and perhaps the University of Minnesota and Hamline University, and the University of Texas. (Actually, both Kansas and Missouri have major law schools in Kansas City.) I can imagine that such an event would well be conducted in Williamsburg, given historical significance; or there could be multiple events in a number of cities around the country (Dallas, Minneapolis, Kansas City, etc.)

To get a handle on the personal freedom issues, one must face the technical aspects of these “inconvenient truths” squarely. What needs to happen is a point-by-point comparison of the most critical parts of argument. Often, the most critical concerns are mathematical in nature. Al Gore made this point well in his “Inconvenient Truth” about global warming, about the rate of increase in temperatures, carbon dioxide concentrates, and rate of decrease in ice cap mass. Essentially, he was talking about the calculus concept of derivative, which is always one of the most critical things to watch when anything that affects economic stability is changing rapidly. There are many points to wonder about, such as why our system is so slow to develop new vaccines. And there would be many critical points of comparison on oil discovery and production peaking, on likely additional reserves, and about the infrastructure and engineering issues for retooling automobiles to use much less fossil fuel and to grow biofuels much more efficiently. Personal liberty can be protected perhaps by “working smart,” a term well known from the workplace where deadlines are such an issue.

In the past, it has been common for governments to depend on consulting firms for detailed prospective statistical reports. There is the “K Street Problem” where most of them are generated and paid for by consulting firms hired by lobbyists and various interest or trade groups. I worked for such a company in 1988-1990 in the Medicare issue, so I know how the system works. Today, the public needs to do this much better.

Another point that bears on all of this delivery of “the tidings” is the examples set by history. For the past few decades, we have a track record of muddling through crises, somehow. When I came of age, we dealt with the Domino Theory, largely exaggerated but not during the Cuban Missile Crisis, which our own foreign policy may have first aggravated. We all know the history of Vietnam, the "unfair" draft, Watergate, and the protests. In 1973 we had the first oil shock, starting with an outright Arab oil embargo, and another shock in 1979 related to Iran. In each case we adjusted after steep price increases. Of course, there was a lot of finger pointing and of manipulations by oil companies about “getting the price up.” Is that true this time? During an election year, it’s inevitable that there will be.

Of course, we all know our situation with military and foreign policy. As in the First Persian Gulf War, and with the quick fall of the Taliban and of Saddam Hussein, we are the Yankees of conventional military power. And, as with Vietnam and now Iraq, we can't keep the peace among peoples whose cultural and religious values are so far from our own of emerging individualism, people who are willing to misuse asymmetry.

There was another math lesson with the AIDS epidemic: the rapid and exponential doubling of cases and deaths with a circumscribed population. That pretty much proved something novel had happened and answered all the denials. Rapid improvements in medicine (all things considered), and behavior changes led to a slow down and leveling off of cases in gay men, even as the disease moved like a hurricane into other populations.

It seems like it is lack of mathematical cognition (in combination with "greed" that is supposed to be "good") that lets the public get duped into legal scams, like the subprime mortgage crisis (the 5 year "balloon"), and lets history keep repeating itself (1929; the savings and loan scandals of the late 1980s, etc). We could all use a little more of Charlie Epps (as in the CBS hit "Numb3rs").

Any time there is an external change affecting society that threatens to demand sacrifices of citizens, there will always be fierce political battles and blaming. We have to get beyond that this time. This time, our level of democracy has to show more personal integrity that what you get by throwing money at lobbyists, who then encourage individuals to mass email form letters to legislators to avoid being made “it” in the struggle. People do sometimes take an "we're all in the same boat" attitude toward political issues (reminds one of closed shop unionism -- also reminds me of comments that students had about organic chemistry in college), when non-adversarial innovative solutions might be available -- whoever and whichever party is in office. But it's true, some of the coming problems can force individualists into accepting more interdependence with others (within and outside of the family) on terms other than theirs.

This brings me back to the social issues. In terms of professional research, the issues involve studies on marriage, divorce, child school performance and behavior, birth rates and replacements (within each group), longevity, health and custodial care costs and responsibility, and the like. There's a wide range of interrelated data to compile. I’ve detailed in my blogs how I lost personal freedom during my coming of age. One can say it was bigotry or McCarthyism or plain discrimination and write it off, but in my history there are some things and issues that are more individualized. Other people needed certain “things” of a psychological reinforcement nature, and my expression myself made them feel that would loose their own psychological investments in social conformity. Older societies often are very protective of family stability as it connects to gender roles, often at the expense of people like me, because these societies make no assumption that external stability, necessary for individualism, can be presumed, and that on a personal level sacrifice will always occur. (There is a lot of nuance underneath this, as explained in previous posts.) What I think is important in a civil forum that deals with the nuances of what people need from each other with regard to theses issues.
Posted by Bill Boushka at 8:57 PM