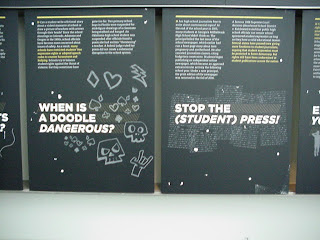 The First Amendment exhibit at the Newseum in Washington DC brings up a number of interesting cases, and one panel gives some examples of overreactions by school officials to student (and probably teacher) speech. Last year, the Supreme Court upheld an Alaska school district’s suspension of a almost graduated high school student who carried a “Bong Hits 4 Jesus” banner in a town parade sanctioned by the school. (That student is now an English teacher himself, ironically.)

But there is much worse, as any quick Internet search can find. In 2003, a middle school student in Richland Hills, TX was suspended for “hacking” a computer for sending an innocuous text message using an older method (with DOS and not using the operating system) rather than by using the method approved by the teacher. Dave Lieber wrote a letter to the Ft. Worth Star Telegram about this, available on Jerry Moore’s “My Short Pencil” here. As the letter writer points out “Hacking is not using a built-in command to send a message.”

The Orlando News in January 2005 reports that two grade school special education students were arrested and suspended for drawing stick figures that communicated a threat, link here. (Story is titled: “Students Arrested Over 'Violent' Stick Figure Drawings: Pictures Show Classmate Being Stabbed, Hung”, link here. Apparently this is the story indicated in an Newseum panel on the 4th Level, “When is a Doddle Dangerous?” According to the Newseum, a federal judge later ruled that the drawings did not represent a “threat.” MSNBC also carried this AP story here.

And in Illinois a high school student was suspended for drawing what was taken to be a gang-related symbol in a notebook. (Here is a PDF giving a typical school policy from West Aurora IL).

The Newseum entry asks “can a student write a fictional story about ….” or “draw a picture of …” situations that describe or portray potential threats to others in the school? The most obvious situation would be, of course, related to school violence (as in Gus Van Sant’s film Elephant), but it could also apply to situations of a sexual nature involving minors. It doesn’t take much imagination to see how a school system will react to finding similar materials authored by a student or (more seriously) teacher on the Internet (as on a Myspace page or blog). It seems to be accepted in commercial film. An important legal question seems to be whether “fiction” can be taken as evidentiary of probable future “fact”. That kind of thinking (“propensity”) underlies the entire “don’t ask don’t tell” policy for gays in the military, for example. In fact, there is little actual case law or statutory law on this problem, outside of the 1979 “Touching” case in California (about a novel where a character unfavorably portrayed simulated a real person), as I discussed on this blog on July 27, 2007 in relation to a problem that I had. There is a divorce case in Vermont where a “fictitious blog” is at issue (Jan. 11). This is becoming an important legal question. Recall that Paramount had to delay the release of the movie "The Kite Runner" out of fear that some viewers in the Muslim world would not understand the abstraction involved in relating to dramatization, and immature visitors, finding fictitious material on the web out of context, may not understand the point of the abstraction in fiction. There have also been liability questions about fiction that seems to incite action, such as a lawsuit over the novel "Hit Man."
Posted by Bill Boushka at 7:28 AM