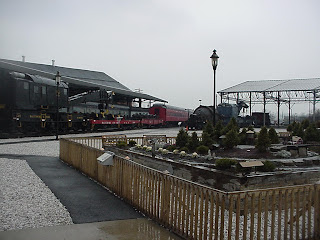 A column today in the DC Examiner by FCPS English teacher and GMU professor Erica Jacobs discusses the Bill of Rights Institute. This should not be confused with a similarly named “Planetary Bill of Rights” which is here.

In fact, Jacobs ‘s column creates a cover headline today Monday April 6 in the online DC Examiner, “How to Honor Student Winners,” link here (in print in the DC edition, the story appears on p 30). The story relates an essay contest, “Being an American,” on civic virtues. The student is to discuss how he or she relates a particular civic virtue personally, and is supposed to connect that value to a founding father and a major historic document. It’s not hard to imagine that such a project could be feasible in any major democratic country. The specific virtue that she mentions is “compromise.”

One of the tricky concepts is that, in any society with liberal ideals for freedom, virtues can compete. For example, in a free society we value personal independence, but we find that we need interdependence also. We realize that external circumstances can compel us to develop more social interdependence again. All the major cultural debates on “family values” revolve around this “ind- and “inter- “ dependency axis. Religious faith often promotes interdependence (as “fellowship”).

There are variations on this dichotomy, such as “competition” and “cooperation.” Some collectivist political ideologies object to the idea of “competition” because they believe it promotes “unfairness” or “injustice” and inequality, or causes some people to become devalued. It’s only the personal sharing of common responsibilities (some of which are not completely voluntarily chosen) by individuals that can offset this problem.

We run into these problems particularly with free speech and the First Amendment. Most litigation based on the First Amendment is based on the idea of looking at content at its “face value” for how it reads in some literal fashion. In practice, however, the way content is found and by whom, and the relationship that the visitor believes that the speaker has to the subject matter all contribute to the practical effect that the content has on the visitor. This is a big problem for school systems, teaching students how to interact safely with others in an anonymous, global medium, and how to interpret what they find in the proper context. Many school systems barely have a grasp on how to do this yet with the Internet. But, the point of four years of English in high school (the study of literature from many cultures and times) is, among other goals, to learn how to interpret material in the context intended by the speaker. Doing so becomes a hard-wired “brain” skill, integrated into the young adult’s personality.

One of the big issues with “rights” is the “responsibilities” that go with rights. On one level, this means accepting personal responsibility for one’s chosen actions, but some responsibilities can come from without, and sometimes “responsibility” becomes quite a subtle, nuanced concept. Is an Internet speaker to be held responsible for how less mature visitors interpret the content that the speaker posts on a blog or social networking profile? This is a profound ethical question that goes beyond the reach of the law right now .We all know about some tragic incidents lately, covered in the media. Much of the online "reputation defense" issue concerns this ethical problem.

Dr. Jacobs had actually taught a high school blogging project two years ago, as described in this article “An Ode to Blogging” from 2007.

Erica Jacobs talks about moving her "TeacherTalk" blog on DC Examiner and its move to the National Examiner, here. "With great power comes great responsibility," as Peter Parker says.
Posted by Bill Boushka at 8:10 AM