Is it too dangerous to talk about personal blogs at work? Sometimes. Not always. 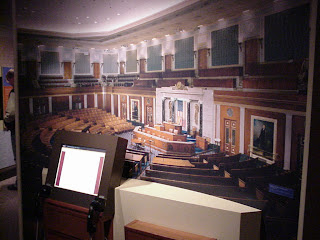 About a year ago, I talked about the issue of mentioning one’s blog, social networking profile or personal website at work. Because sometimes content on a site might be misinterpreted “out of context” (as part of the “reputation defense” issue), it can be viewed as an inappropriate thing to do in some workplaces. One link is here (Jan. 29, 2007). And I took it up on Feb. 5 (and Feb 15) for substitute teachers here.

With regard to the incident that I discussed on July 27 on this blog, I wanted to note, for the record, that I had mentioned my websites and particularly my participation in the litigation against COPA (the Child Online Protection Act of 1998) numerous times before on assignments.

When I had a history-and-social-studies assignment, I often mentioned it in the handwritten notes to the regular teacher at the end of the day. I often mentioned that I had visited the Supreme Court twice (“extended” visits that started from the “three minute line”). I thought they would find it interesting that a “real world” person had experience with these matters. And I know that some of them did.

At one high school, about six months before the fall 2005 “meltdown,”I informally “briefed” the history teachers on COPA, showing them all of the links (mine, the ACLU, the Supreme Court’s own slip opinions) during a “planning period” in the teacher workroom. They looked the items up on computers or laptops in the workroom. They seemed genuinely interested.

At another, I showed it to a (young) history teacher for whom I subbed as a “assistant” and I saw him looking at the material even an hour later when I walked past his classroom. I would also show it to a female history teacher who would soon appear on “It’s Academic.”

At still another, I got to give a speech at the Arlington Career Center on Internet Safety issues. And at the same Center, with another teacher, who had helped the kids produce a feature film called “The House Party” (which has been shown publicly in Arlington), we went over some of my movie reviews, particularly that of “Jerome’s Razor,” which the teacher tried to find and watch online, because of the instructive nature of the filmmaking.

Finally, I went over one of my online “quizzes” with an English teacher, and had some discussion about President Bush’s inaugural speech.

So, countless times this had worked out OK. Then, apparently a parent found a “screenplay” by me that can be misconstrued out of context, and interpreted it as “real” rather than “fiction,” leading to the "big problem" and job meltdown, as I explained back on July 27 on this blog. The restructuring of my domains, merging them all onto doaskdotell.com, may have made that one item more conspicuous to a random observer. I discussed my strategy with domain names on another blog yesterday, here.

One can imagine a "do not mention" policy as part of the "solution" for removing "don't ask don't tell" for the military and replacing with a practical code of conduct for conditions in the military. Then one can apply some of the same precepts for teachers, but with different focus. (Think it through, what it might mean.)

The world of “reputation defense” is certainly a murky, cold and foggy one. Welcome to Titan.
Posted by Bill Boushka at 5:48 AM