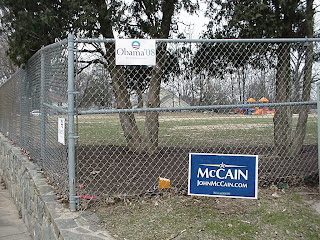 Well, today is indeed Chesapeake Primary (or Potomac Primary) day. This time, I did not work the polls. (PBS has a documentary “By the People: Democracy in the Wild”, review here. However, this time I did not offer “national service” for a sixteen hour day, and simply went to the polling place (where I had worked in November) and voted as a private citizen. Yes, they recognized me.

Virginia is still using the WinVote system, which does not leave a detailed trail by vote, but does provide very detailed summary reports. Also, in Virginia, the voter goes to the same polling place for either party's Primary, and does not have to be pre-registered for one party; the voter can decide at the last minute (when checking in) which Primary to vote in, but can vote in only one of them. This time the "technical process" is “complicated” by the fact that the poll workers have to count the voters for the Democratic and Republican primaries separately when one logs in. The poll worker then has to click “which primary” when accessing the machine with the smart key. But there is only one choice to make for any one voter.

The poll here in north Arlington was crowded when I went at 9:30 AM. It was much more crowded than it was for the election in November, when I worked. If the mid-term election in 2006 is any indication, the crowds will probably dwindle by about 10:30 AM, pick up during the lunch hour, dwindle, and then become very heavy after 4:30 PM. The polls opened at 6 AM (people were waiting to get in from the February cold and dark at 5:45, I was told), and will close at 7 PM. Anyone in the building at 7 PM can vote, but no one is admitted after the polls close. The likelihood is that it will take thirty minutes or so to clear the line after the polls close. I had to wait about twenty minutes to vote this morning.

I had planned to vote for Hillary, but I was so taken by Oprah Winfrey’s program on building a dream house for a family yesterday that I rewarded Oprah with a vote for Barak Obama at the last minute. The media stars really can make candidates look good, even at the last minute.

On ABC’s “The View” this morning, Barbara Walters said that Clinton-Obama could be a dream team, but not the other way around.
Posted by Bill Boushka at 8:12 AM