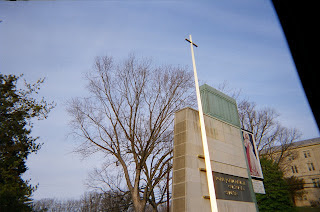 On these blogs, I’ve talked in a few postings about the disturbing trend for web speakers (especially teens) to “defame” themselves on the Web, particularly on social networking sites, as a form of what they believe to be political or social protest against what seem like arbitrary laws that protect teens (such as regarding drinking) or conformist social standards.

Media reports indicate how seriously unnerved potential and current employers are by this practice. This whole development, in the last three years or so, is a bit of a surprise to everyone—from both sides.

Many times when this happens, the speaker has not had his or her own children, or has not experienced responsibility for or accountability to anyone else besides the self. The speaker may well be unwilling to accept this kind of responsibility except on his or her own terms, because that is a basic principle of modern individualism. But the employer reasonably wonders if the person understands the idea that stakeholders or clients will want to “depend” on the person, at least in a professional capacity, and would not be able to do so if the person “defames” the self in a public space, even to make a political point. The content may in itself be legitimate and legal objectively (although underage drinking, for example, is not when caught in a video), but the individual would not present the self this way if others had to depend on him or her. It’s a bit of a cultural and even moral dilemma, good for Sunday school. Even Donald Trump weighed in on this in an angry outburst "in the boardroom" on "The Apprentice" when a candidate wanted to give up his exemption for having won the previous week; Trump called that "life-threatening" behavior.

While we have grown used to “radical individualism” in the past couple of decades, and use it to justify many expressive behaviors, the idea of interdependence has crept back into public debate, partly because of all of the new “external” potential problems. After all, the debate over “family values” (to speak of it generically) has a lot to do with emotional connection and loyalty that many people (like parents) believe they have a right to expect from others to avoid being marginalized, even as they have made today’s lifestyles possible. The intergenerational connections seem necessary if people have enough incentive to take seriously problems like global warming. People have discussed this concept recently even in a “New Age” context, in conjunction with books and films like “The Secret,” as on Oprah yesterday. It all sounds like karma.
Posted by Bill Boushka at 8:30 AM