The "Married with Kids" Boon 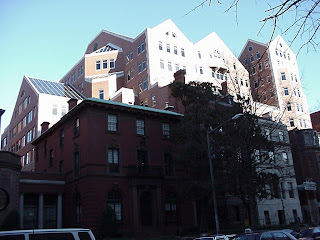 A Washington Post Express (the synoptic rag of that Metro riders who find seats entertain themselves with, especially after the recent massive rush hour fare hikes) story on p 34 today (Jan. 23) in the “Society” column was titled, “Single & Satisfied: Some bachelors enjoy a solitary life, free of serious relationships.”

The story refers to the “Alternatives to Marriage Project,” link here.

The story reports that in 2006, 33% of men in their early thirties had never married.

The article mentions that speculation on a single man’s sexual preferences may occur if he builds friendships with co-workers.

I know that perception well from the 1970s. The article notes “the idea that in order to completely fulfill your role as a leader in this business or policy setting, you need the support of a family.” In the 60s and up to the early 1970s, some companies would not hire unmarried men over a certain age. One episode of the 50s sitcom (black and white only) “My Little Margie” was based on that practice.

The article also quotes Nicky Grist from the Alternatives to Marriage Project as saying, “single men often say they are asked to work on holidays, put on longer hours or travel more for business. Employers often assume that without a spouse, unwed workers have extra time to spare.” In some less reputable HR circles there exists the snicker: "getting single people at a discount."

This has been particularly problematic in salaried positions, with occasional stories about this problem surfacing in the news media over the years (such as a 1997 Wall Street Journal story about a single female lawyer who was forced to miss her own birthday party). I know this problem in computer data centers from the way uncompensated nightcall sometimes is shared. Elinor Burkett took up this problem in her book “The Baby Boon: How Family-Free America Cheats the Childless” published by the Free Press in 2000. (Link to my review is here.) Onm that review page, another view is expressed in Philip Longman 's "The Empty Cradle," (2004, Basic Books) which talks about the demographic, economic and political issues of longer life spans and lower birth rates in more "prosperous" groups (although since then media reports indicate that birth rates in the United States are higher than in many parts of Europe).

A few years ago, there was an interesting article “Childless by Choice” by Leslie Fulbright in the Seattle Times (April 1, 2003). The article discussed organizations for child-free couples and singles, such as Child Free by Choice, No Rugrats, To Breed or Not to Breed Brats, and No Kidding!. The article went on to report that, when prodded, some cultural conservatives, like Allan Carlson of the Family Research Council, swung back with in-your-face comments: “’Any healthy culture is child-centric because the future rests with our children… ’These (No Kidding!) people are copping out on the future, refusing to accept the standard obligation for responsible membership in our society. I would describe them as childish, immature and irresponsible.’”

In recent years, I have been challenged to show why I am not willing to take more "assertive" role in administering the rule of others or selling the content of others, why I am not interested in advancement and authority for its own sake, especially in situations that involve teaching or role-modeling for "other people's children." I say that part of the answer has to do with not having father children myself or accepted some socially supported equivalent role. But then others will challenge me and take this into an existential direction. A lot can happen where there is more need around than there was before.

The mainstream media has treated this whole subject area very gingerly. Bloggers need not be so kind and gentle.
Posted by Bill Boushka at 11:00 AM