Seize the Web from Home, and fly over the Culture Wars 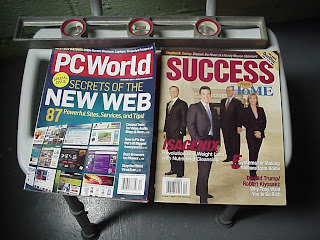 A look at the checkout line offerings at a local red-letter Staples store gives a skewed impression in what is happening these days in the area of self-expression (the “look at me generation”) and entrepreneurialism. The December 2007 "PC World", with a sky-blue cover, reads “Special Issue: Secrets of the New Web: 87 Powerful Sites, Services and Tips.”

The core article seems to be by Jeff Bertolucci, “Seize the Web,” which is a bit like a college essay test question with many little parts. Well, not really. But there are a lot of components. “Star in your own Videos.” That goes way beyond YouTube and mentions Metacafe, Veoh, and Crackle (that’s not bronchitis). Spike is associated the entry level filmmaker’s product iFilm (all the rage in 2002 when there were waiting lists for the iMac). I used that and edited a 34 minute film with it, not polished enough for commercial distribution (and I’d need the releases). But today middle school kids are learning to use Premiere and FinalCut on their own and have, on more than one occasion, produced short films worthy of being in major festivals (I can think of one about the treatment of military veterans right off the bat).

To get back on track with this magazine, there is also “Be the Star of your own social network,” going beyond what you usually hear about Myspace and Facebook. Then there is “Blog for Show, Blog for Dough,” the latter of which this entry is about. The article does recommend Blogger for openers, and gives a nod to Wordpress as a step up for more advanced knowledge management through blogs.

I also like this one “Get your Book Read.” He discusses a number of self-publishing services that have varying business models. Besides iUniverse and xLibris, there is now Amazon’s BookSurge, as well as Lulu (Alban Berg’s opera perhaps?) and Cafepress. Three decades ago, the only model was “subsidy publishing,” and the players were Vantage Press and Exposition. It did not enjoy a lot of accolades. Now, print-on-demand has changed everything. Some self-publishers are more what literary agents call “cooperative publishers” and have sophisticated packages aimed at improving the editing quality and professionalism of the product.

There is an interesting section "Life without Software" by Scott Spanbauer, discussing how most functions can be performed interactively over the web with server-sided computing and without one's own desktop applications. But that sounds like returning to the culture of the mainframe, doesn't it?

A somewhat different view of self-promotion comes from the beige “Success from Home”, at least the September 2007 issue. Actually, this magazine may comport more with some of the evangelical community since as there is a banner “Stephen R. Covey: Discover the Power of a Family Mission Statement.” Inside, there are a lot of materials about sales business run from home, some of the material centered around Isagenix, a weight-loss product. But there is also a story “Donald Trump / Robert Kiyosakt: Why the Want You to be Rich.” Inside there is an article by John Fleming, “Way of the Future” that presents the case for “Direct Selling” and later there is a piece by Trump and Kiyosaki, “Why We Recommend Direct Marketing.”

There is a certain contrast between the tone of these two magazines. The PC magazine is centered around personal autonomy, and is based on the (to some people, incredible) idea that self-produced material will get noticed, even in a world where there are hundreds of millions of blogs, profiles and videos. That’s true, and it is a simply a result of “exponential mathematics” and the binary fact, mathematical behavior drives Google’s own success, but that seems so befuddling to high school students in Algebra II. There is self-interest in a great education, particularly in the fundamentals (like math). They really do pay off for you.

The “Success” magazine seems closer to family values, to be sure, but even that has to find roots in individual self-interest. Here, again, so much of family financial planning depends on immutable mathematical facts (even beyond the control of God): compound interest. That’s why it’s so important to pay off credit card debts fully each cycle (families don’t). But Success is going beyond that, of course, to get into the idea that individuals and families can free themselves from dependency on employer benevolence: if you work for yourself and can make money at it, you can’t be laid off. The work-from-home world can lead into some interesting byways, such as the cash-flow business; getting into these sometimes means a large upfront fee for a seminar and introductory materials, and a quick go-nogo decision.

When it comes to independence and entrepreneurialism, there are a couple of indispensables. One if content, and the other is notability. You need to have something worth selling. Personally, I feel a lot better about selling something that I developed myself, and that advances social good just beyond the bottom line or taking care of one family. I can believe that people “need” what I have, but I have to make them “want” it so that it can generate a profit. That is a key component in giving it “notability” (I still don’t have a Wikipedia entry on me, although there is certainly major one on “don’t ask don’t tell”).

In general, although this is not without exceptions, people who have kids and families to support may be more psychologically attuned to make a living by selling the services and products and others, because they believe that taking care of their own families trumps over addressing the “needs of the world.” For many people, the post World War II economic boom was based on salesmanship and on manipulating demand as a “profession,” and that helped set the atmosphere of the 50s. At the same time, underlying problems, centered first around national security, forced a significant subset of the population – the predecessors of today’s geeks – to focus on truth for its own sake.

It is true that people generally get paid to promote the work of others. It’s understandable how this stretches our notions of ethics. In Tony Kushner’s play (and the drived HBO film) “Angels in America” there is a late scene dealing with the “immorality” of making a living ghostwriting Supreme Court opinions whose logic one personally does not believe.

All of this has been going against an increasing din of counter-hype about the dangers of too much self-promotion, too much self-expression (especially on the Internet), the shredding of social contracts (especially the sundering of unions), and the risks posed by shady operators (the scams, the identity thefts, the hoaxes, the predators, the hackers), as well as the dangers provided by external threats (global warming, pandemics, oil shocks, and terrorism), as well as family demographics (birth rates and life spans, pensions and social security, and long term care) all of which are promoted as reasons to give up some individual sovereignty and learn social interdependence again, starting first with the obligatory nuclear family. Particularly disturbing are persistent media reports during the past two years about employers misinterpreting information they glean by trying to use social networking sites and blogs to do “background investigations” on employees and applicants, often getting wrong impressions, sometimes about the wrong person (the “reputation defender” problem). Yet, some of this chaos has always been with us. Just look at the Roaring 20s, and what followed. What’s different today is asymmetry, the potential unpredictable “power” of any one person acting on his own recognizance, counter to inefficient bureaucracy. Or is it that different – just what did happen in Germany in the 1930s?

What we have is a perfect storm, a low pressure system that feeds itself and draws all within. We call it the “culture wars”. It is very hard to see how things will wind up. I do know that the tone of some of my postings expresses a deep concern about where we could be headed, compared to the optimism of my first book ten years ago.
Posted by Bill Boushka at 8:30 AM