Independence and Inter-dependence: closing the circle of the culture wars 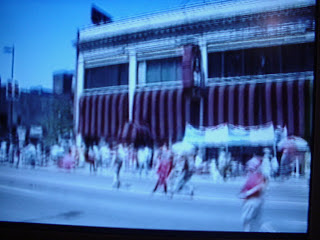 After I came of age and became my own boss (this didn’t happen in full until I was 26 and out of the Army and finally had my own apartment), I learned in time the mores of the new adult world, as it emerged post 60s, post Watergate. Don’t cling to people, be your own man, accomplish something, be selective in your people to share intimacy with, and be comfortable with being alone at times. “Being your own man” became the preventive vaccine for jealousy, and that sort of mantra became popular in gay counseling centers in New York and San Francisco even in the 1970s.

Sometimes when riding the subway lines above ground in the outer boroughs of New York City, I would note the social contrasts. Manhattan seemed to be the province of singles. (That’s not totally true, as the rich in the Trump towers have their own family scenes); the boroughs, with their detached homes, were for families. You would hear people make that kind of contrast between social cultures of states like California and Texas. Yet, even among families, cultural weather fronts were developing, over the place of women, of traditional gender roles, of how to raise kids, and the like.

When I moved from New York to Dallas in 1979, I saw more of “family culture” for a while, even at events as mundane as Friday night “north Dallas” poker parties held by coworkers.

I came to see myself as a kind of Phylos the Tibetan, a dweller on two planets, a Dominion-hopper (to use Clive Barker's metaphor of reconciling cultures in his 1991 fantasy novel Imajica). The urban exile that I lived in, where I could take the time to focus on my own interpersonal needs well into my thirties, seemed a bit circumscribed. I could visit the Outside, but that’s what I was, a guest, a visitor on pass.

The gay male community would have a dose of social reality in the 1980s with the way it handled the demands of the AIDS crisis. Quickly, buddy programs evolved in various cities, such as with the Gay Men’s Health Crisis in New York, Oak Lawn Counseling Center in Dallas, Whitman Walker Clinic in Washington, and Minnesota AIDS Project (eventually incorporating “Pride Alive”) in Minneapolis. But buddy programs did not constitute family responsibility in the usual sense (although for some volunteers it seemed to). In the beginning, most clients did not live long; those who did became local “stars.” Later, as the rapidly improving anti-retroviral medications greatly extended life spans and enabled PWA’s to go back to work, the nature of the need in these buddy programs changed. The programs became more politicized and the volunteer duties specialized.

In the 1990s, the political debates over social responsibility shifted, with emphasis again on the GLBT community with the emerging battles over gays in the military, gay marriage and partnerships, and gay adoption and custody. The meaning of all this went beyond its effect on GLBT people; the debates started to reissue the notions that previous generations (like Tom Brokaw’s “Greatest Generation”) had taken for granted, that some social responsibilities exist in common and need to be shared, and this need affects the way people conduct their relationships and their lives. In particular, there was emerging tension between those raising families (usually children but, also rapidly becoming important because of demographics, having eldercare responsibilities), and “singletons” who seemed to do just fine on their own (many employers now actually preferred them) but whose expressiveness could affect families (look at the issues of Internet censorship and minors, such as the recent COPA litigation). The communal pressures seemed to increase after 9/11, various financial scandals, and a growing awareness that natural perils like global warming and pandemics could force us to accept increased social interdependence – the kind that extended nuclear families used to offer. Persons who had lived productively without having kids would be expected to take on family responsibilities, most of all eldercare, but, given the practical directions of the job market (the need for teachers, nurses, etc) all kinds of new interpersonal responsibilities with other people’s children.

I found pressures, both within the family, and on the job in substitute teaching situations, to adopt a more community-centered attitude about social connections. Independence and selectivity were not absolute virtues in the “real life” world. The do-it-yourself and broadcast-yourself possibilities with the Internet could be turned upside down into pressuring people into social conformity. In various situations, people demanded responsiveness and receptiveness, deferential loyalty, even protectiveness from me, when I had been used to a world in which I had been “God of my own space” (sort of like god of one’s own blogs). The responsiveness extends indefinitely, unlike the circumstances of being a "baby buddy" twenty years ago for PWA's. People sometimes would advance notions that in my world of occasional hyper-individualism would seem self-deprecating. It was all right, even a virtue, to need the presence., attention, even pampering from others, to know that one was valued. This sounds like a culture shock, but perhaps it simply runs full circle, back to school days, when learning to share chores and do them with precision, to fit in with the social demands of others who would protect “me”, was a big deal.

Coordinate post on GLBT blog.
Posted by Bill Boushka at 11:15 AM