The Christmas Story: it fits modern concerns about reputation 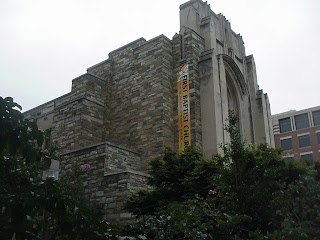 At the First Baptist Church of the City of Washington DC this Sunday (Dec. 23, 2007), pastor Dr. James Somerville gave a sermon about Christmas – the announcement nine months before – that actually ties together a lot of the concerns I’ve been discussing recently. Technically, the sermon was not about the Annunciation to Mary (Luke 1:26-38), but rather the notification to Joseph by dream with an angel in Matthew 1:18-25. The use of dream almost sounds like an official notification by letter or even email in today’s society. It’s important to note that the Annunciation is also discussed in the Koran, and the underlying concepts are every bit as important to Muslims as to Christians. Jimmy Carter's recent controversial book about Palestine mentions the Church of the Annunciation in Nazareth.

The underlying problem for Joseph was reputation. As Dr. Somerville pointed out, small town America used to be a place where you could get your name in the local paper by growing the biggest turnip. It was that way in Nazareth. Joseph was a well respected man who was engaged to Mary, and who was expected to build on living quarters after marrying her and before consummating the marriage. As an institution, marriage was even more fundamental to the core of being than it is for us today, with all of our political debates. Mary was quite young (although not too young to marry by the moral standards of her society). So when she became visibly pregnant (maybe like Juno in the current film) everyone wanted to know who the father was.

In this culture, such circumstances could easily have become a source of false shame for Joseph. Other townspeople would think that Mary had been with another man, which is not bad only for her, but for Joseph as well, as he cannot maintain the loyalty of his fiancée or wife. Yes, soap operas revolve around this. Yet, as the sermon went on, Joseph let God turn this situation into one of historical honor.

Reputation in that society was quite a collective experience, as it has been for most of history. Generally, people have understood that their actions and personal reputations can affect the reputations of other family members. (The last sentence of the Old Testament, in the book of Malachi, reinforces the notion of family reputation in a curious manner.) Importance of biological lineal family is demonstrated by the fact that, for purposes of being registered and counted for Roman taxation, "Saint Joseph" and Mary had to travel to Bethlehem, birthplace of David, ancestor of Joseph as part of the House of David. Familial and tribal reputation, as a collective concept, may even be more central to many Muslim cultures. Since the rise of civil rights and individualism, which accompanied the development of technology in the latter part of the last century (starting particularly in the 1960s), our culture has gradually accepted a more privatized view of “reputation.”

Of course, the Internet has mixed all of this up. Search engines became important in the mid to late 90s, and social networking sites did the same a few years ago. Now, anyone can mediate his own reputation across the entire globe and, unfortunately, others can also (sometimes by bearing false witness, as mentioned in the Ten Commandments) seriously damage someone’s reputation online without a lot of accountability. (There are companies like Reputation Defender that are trying to change that.) Curiously, the technology that makes the topology of today’s Internet possible was well under development in the Defense industry by the 1960s, at a time (as with the 1968 film “2001 A Space Odyssey) when we expected space travel to revolutionize everything; instead it was instant information travel, to the extent that the very Lesbegue measure of the space we live in changed.

One problem with reputation is that it is a very subjective concept, defined in the eye of the beholders. True, many of the abuses on the Internet deal with mean-spirited for frankly libelous gossip. But at deeper levels “reputation” seems to be a troubling notion indeed. One can deal with troubling subject matter and others may perceive (whether correctly or not) the desire to write about them as evidence of personal problems or as a lack of personal competitiveness (which could affect dependent family members). Or one can present a rebellious parody of oneself in some fictitious setting, or perhaps a fun picture of oneself bucking the system, and find that potential or current employers take it very seriously. Employers have a tough problem in sensing what matters for reputation. They may feel queasy about issues like sexual orientation but know that prejudicial behavior is not acceptable any longer, and tend to focus on narrow behaviors that are easy to rule out, like alcohol and drug abuse.

Another problem is that employers (and to a large extent families) use reputations of their leaders to represent the interests of their customers, clients (or family members) to the public at large. Conceptually, the Internet with its global search engine capability complicates this because it enables the individual to do this on his own without the approval of others. That sounds wonderful and democratizing, but then it undermines the notion that the individual can represent the interests of his clients publicly in any competitive or adversarial setting. Society is now only beginning to grasp the scope of this as an ethical problem.

The Scriptures, of course, deal with something bigger still: that man, whether acting on his own or through the family, corporate interest, tribe, or political unit that he belongs to, can really have his own way in life, even with his own ability. That’s an idea that crystallizes in objectivism (or what we call today "radical individualism" or "personal autonomy"), but is something than man develops on his own once spiritual and religious structures give him the ethical compass to do so. The scriptures (of any faith) constantly remind us of the limits of our own best efforts, and of the fact that we need to accept interdependence on one another and on some kind of Supreme Being. And, yes, there is the Gift of Grace, so symbolized by this time of year.

Ronald Reagan once said that the one book he could not do without is the Bible. Perhaps that’s an exaggeration, but on the issue of personality and reputation it has a lot to say after all, particularly at Christmas. But the issue is also taken up by the Koran. Its underlying moral importance to a progressive society transcends all specific creeds but belongs in all of them. 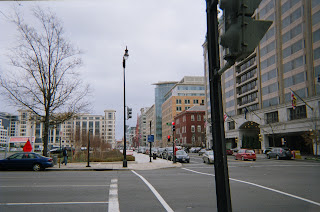 McLaughlin's One (NBC4) today at noon presented a Boston University professor Paula Fredriksen, author of "Jesus: King of the Jews: A Jewish Life and the Emergence of Christianity" (Vintage, 2000). She indicated that the notion of virginity comes from the prophecy in the Greek version of Isaiah 7:14, "parthenos", which had been "aalmah" or "young girl" in Hebrew, so the idea of virginity is not necessarily supported. (The King James does use the word "virgin".) Jesus could instead be a legitimate biological descendant of David. The program also presented Jeffrey Sheler, with an opposing view. The program also considered the common belief that anti-Semitism arose because of beliefs that the Jews in Jerusalem were complicit with with the crucifixion (Mel Gibson's "The Passion of the Christ" film). 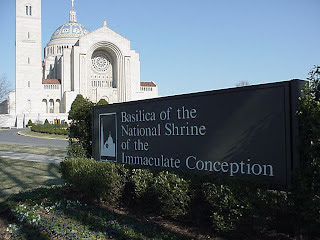 But, the virginity concept is important for a subtle reason that extends the reputation concept already discussed. It suggests that sometimes men can be expected to support children that they did not biologically father. In our modern system of morality, this must be controversial.
Posted by Bill Boushka at 4:03 PM