Yes, it's getting harder to remain a libertarian 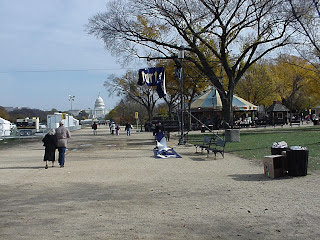 I wrote on July 30 that it is getting harder to remain a libertarian – and actually LP party people have been saying that privately ever since 9/11. Then, I wrote about this from a mostly personal perspective. Now some of the recent trends that accompany globalization make it useful to look at the “big problems” categorically.

The most important problem seems to be that the Western world consumes, per person, and pollutes out of proportion to population. It’s obvious that the competition from big countries with large populations (most of all China) who want our standard of living can produce huge political and security problems.

That concerns decomposes into two overlapping areas: global warming, and oil consumption. Global warming, caused apparently by carbon emissions from developed countries, is likely to impact less developed parts of the world (floods in Bangladesh, droughts in Africa) most severely – meaning that consequences aren’t apparent at once to the “perpetrators” but do impact the “victims” by social class. Of course, all of this gets said as we realize that nature alone can produce huge climate changes (as it has over hundred of millions of years – that’s why there’s oil in the desert Middle East). Still, the evidence that man has contributed to the current situation is overwhelming, and so is the unpredictability of what may actually happen (what about the possible sudden loss of the Gulf Stream?)

The affiliated concern in oil consumption. It’s possible to reduce oil consumption while increasing global warming, and it’s possible that developed countries, when consuming fossil fuels, may pollute less (and emit fewer carbons) because of better technology. But it’s obvious that China and other countries are becoming competitive consumers for oil, and that the Western consumers are open to condemnation from Muslim zealots who claim that their lands have been occupied for cheap oil. This sort of thing leads to tirade like that of far left-wing Venezuelan president Hugo Chavez, who recently threated that oil would go to $200 a barrel if the US went on any more "redacted" military misadventures. ABC World News Tonight on "A Closer Look" ran a comparative simulation of oil use once China has the same rate of automobile ownership (without re-engineering away from petroleum fuel) as Americans.

Another area where “collective” forces reign is public health and the new concerns about pandemics. In the 1980s, the religious right tested the waters with the idea that private sexual behaviors (spreading HIV) could jeopardize the lives of the “innocent.” That died out, but in the past few years we are seeing new concerns about “healthy carriers” or the moral issues associated with personal “typhoid Marys”) with truly communicable diseases. It’s a complicated picture. Some of it is related to overuse of antibiotics – again, and example where “personal actions” complicate future public health. But with most viruses and many bacteria, the practical reality is that normally people develop resistance as they go through life. A person can be sickly as a child and then have very little work or productivity disruption as an adult because resistance is built up with a lifetime of crowds, gatherings, bars, and intimacy. The problem is that some populations (kids, the elderly, the immunosuppressed) are vulnerable to infections normally tolerated when carried by others – and there are some sudden surprises – like the unpredictable behavior of “superbugs”. Even so, draconian government actions against those identified with TB seem hard to justify, since TB is normally not easy to transmit.

And on top of all this, there is the concern of the fatal pandemic, bird flu, or the emergence of a virus so novel that the world population is unprepared for it. The mysteries of the 1918 Spanish flu become decoded and we realize it can happen again. But it is not personal behavior in the west that is the issue (other than increased mobility as with air travel); it seems that it may be agricultural practices in less developed parts of the world, where people live close to poultry and farm animals. But why hasn’t that been more of a problem in the past? Well, maybe it really has.

We find ourselves in a tug of war – can market driven technology keep us ahead of the threats? Why don’t we have an effective avian flu vaccine yet for mass use? One reason could be careless implementation of product liability laws. That’s a good libertarian argument. Technology can reduce threats and save lives. John Stossel makes that point all the time.

The social history of the past few decades has been the development of personal autonomy and individual sovereignty, at least for consenting adults. This has a tendency to leave a lot of people behind (those who are personally less “competitive” or more dependent on the socialization of others around them), and that leads to backlashes and demands that everyone be accountable to their own family and community (even if they don’t have their own children – and falling birth rates among the affluent are creating still another collective demographic problem with eldercare). The sociologist’s name for those demands is “public morality.”

An interesting sidebar to this could be the unexplained epidemic of autism (also Aspergers) in children (especially boys), about which an important letter appears in today's (Nov. 20, 2007) Washington Times. There are unproven theories about vaccines and toxins, but it's also possible that culture (and excessive infant media exposure) have something to do with it, making toddler brains decide to withdraw from what seems like gratuitous or unnecessary "real" social stimulation.

The challenges ahead (global warming, terrorism, pandemics -- as well as the usually overblown shocks presented on the History Channel's "mega-disasters" series) may well force people to accept more socialization and local or familial interdependence than has been expected of the past couple of generations. We even hear that now said in conjunction with the possibility of running out of oil without a global technological infrastructure that can support globalization on “current sunlight” – Matthew Simmons (in his book “Twilight in the Desert”) wrote that we need to learn to produce more locally and trade and travel less (in contradiction to the ideas of Thomas Friedman ‘s “Flat World”). But we heard that before, back in the “collectivist” 1970s with the oil shocks then, and we muddle through it and personal freedom got stronger, with productivity. Will that be true again?

Note: Feb 21 2008. Since this post was written, there has emerged more medical evidence linking autism and related conditions to genetics.
Posted by Bill Boushka at 8:40 AM