Why "don't ask don't tell" is still a galactic-central issue 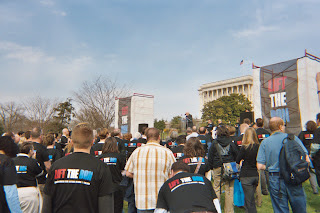 I recall in the mid 1990s that a trial attorney from a major Washington DC (Pennsylvania Ave) law firm told a GLBT audience that the military gay ban (aka “don’t ask don’t tell” policy) was one of the most important issues that it faces, and that it could potentially become one of the nation’s most important national security and public policy issues. That is so despite the fact that the quantity of people affected is, compare to many issues, relatively small (although close to 12000 people have been discharged since 1993 under the policy).

Some of the effects of the ban are practical. The military often provides careers and college educations to those who are otherwise disadvantaged, and the tuition recoupment cases are particularly troubling. From a security perspective, the ban seems to be causing the military to lose scare language and medical skills.

But the biggest concern is somewhat more symbolic. The ban, at least until studied in detail, implies to the public that GLBT people are not fit to do their share in defending the country, a point that has become more important again in a post 9/11 world where we cannot take our freedom for granted. If they are not fit to serve, why should they have equal rights in other areas?

I came of age when we had the Vietnam era military draft. I remember the controversy about student deferments, which were eliminated with the lottery in 1969. I also remembered the moral dichotomies: it seemed that a draft penalized the healthy and fit. It penalized men and assumed that they had to prove they could protect women and children before they had rights to their own lives. A lot of this kind of thinking started to recede after Nixon ended the draft around 1973, but since 9/11 we have heard a lot of talk about restoring it and about how the “sacrifices” should be shared equally. It gets expanded into discussions of universal national service. You wouldn’t need formal conscription (although the Selective Service System is still intact and ready to go); you could have a system with much stronger carrots, and some leading Democrats are pushing that angle. At least, that answers the objection of “involuntary servitude.” Still, the obvious question is, what about gays? “Civilian” service only? What about the Peace Corps in Muslim countries.

That brings up the central justification for the “ban” as it emerged in the 1993 debate: that it was necessary to protect the “privacy” of straight soldiers in conditions of forced intimacy. That also led to discussions about unit cohesion. I had an upsidedown relationship with this whole debate. I had been thrown out of William and Mary as a freshman in November 1961 after telling the Dean of Men that I was gay, and it was assumed that my presence and knowledge of my predisposition threatened the delicate “masculinity” or moral normal boys. (Although, after a stay-at-home college education and dorm graduate school, I would personally serve in the Army stateside for two years without incident, not exactly openly.) That’s similar to what the military was thinking. But we run into forced intimacy in other occupations: fire departments (this was a debate in NYC in the 1970s), law enforcement, intelligence. It seems that these concerns have not been as serious in these areas. One wonders about medicine, nursing, and even teaching, where at work one might have to attend to custodial needs of a non-consenting adult person.

To it’s credit, when Congress passed the 1993 law, it tried to say that the military is “different” from these other areas. Nevertheless, the message was clear: gay people, men especially, should not be trusted in some intimate same-sex environments.

I even thought at the time that some sort of more “humane” kind of “don’t tell” could work. After all, back then, the concern was “having a life” (we called it a “private life” and civil libertarians talked about “private choices” as “fundamental rights”) and not having to bring it into the workplace. This debate was going on just before the general public caught on to the Internet, and in a few years search engines were making everything public, to the point that public openness and candor became a virtue that seemed more important to many people than “privacy”, even in living quarters or in barracks.

It is true, there has been steady improvement in defense-related civilian employment for gays. I applied for a top secret clearance when I had a civilian job in 1972, and the outcome was indeterminate. By the early 1990s, the situation had become much better, and in 1995 the Clinton administration issued an executive order that supposedly protected gays in security clearances and civilian defense employment.

I was in an odd position, working in the 1990s for a company that specialized in selling life insurance to military officers when I decided to do the book. I was not comfortable with this, but fortunately the company was acquired, and I took a position with the acquiring company in Minneapolis. Still, this raises “moral” questions. If I am unsuitable to take up arms for my country, should I make a living off of it as a civilian? There are some people who would say no.

We get to the recent issue of ENDA which, along with hate crimes legislation, represents a practical advance in rights for many GLBT people, but it is far from perfect because of the various exclusions (trans-gender, military, disparate impact, etc.) But, really, we come back to the question of sharing responsibility.

It’s interesting how history tracks. Clinton’s attempt to lift the military ban came up after the “first” 1990-1991 Persian Gulf War, which represented more of a threat to security than maybe many of us realize today. The war showed (just as World War II and Vietnam had -- indeed, the Army had stopped “asking” by 1966), that the military can look the other way on gays when it needs people deployed in real combat. It was about this time – when there was real need – that security clearances were being handled more fairly, too. And, to close the circle, the American success (in the Persian Gulf War) then may well have helped contribute to the pressure on the Soviet Union at the end of 1991, leading to the collapse of old-style communism. And now, elements of that War helped set the stage for 9/11 and our situation with Iraq, Afghanistan, etc. and Al Qaeda today. (I leave the conduct of Bush on Iraq for another time.) All of these historical trends relate. And, by the way, this was all accomplished with a volunteer military, until Bush started the repeat Reserve and Guard deployments to Iraq and the “back door draft” leading to calls for a real draft again.

Not long after Clinton raised the issue of the military ban, gay marriage (at least in Hawaii and then Vermont) percolated in the mid 1990s as an issue, to explode with the Massachusetts decision in 2004. But even in the 90s we were starting to see “shared responsibility” as part of the debate. Here the domestic responsibility includes raising the next generation (the constant call for adoptive and foster parents, the publicity over the teacher shortage and “no child left behind” and caring for the last one (the demographics of eldercare with a lower birthrate, and how filial responsibility could come to affect GLBT people. All of these issues are interconnected, like routes on a graph theory problem.

It's encouraging that individualism has held together somewhat even after 9/11, with Lawrence v. Texas (2003) and the successful outcome in getting COPA declared unconstitutional at a district court trial last year. The political pressure to lift the ban through democratic legislative processes, given how things are evolving (and the evangelical political meltdown after all the scandals) make Mart Meehan's bill to lift the ban seem credible, when a few years ago it sounded like a fantasy (constitutional challenges to the ban have not fared well in appeals courts because of "deference to the military"). A good blockbuster film on it could help seal its demise.

In the period after Stonewall, the real gains were in being able to lead our lives within reason, at least in larger cities. In the 80s, many of us fought for our lives. In the 90s, the thinking changed, away from the emphasis on protecting private choices to the importance of full equality because equality is an important part of sharing responsibility (and sharing psychological “risk taking” too). In general, full public equality is important especially in situations where one needs to be counted on as an authority figure or role model (like a teacher). All of this only became clearer after the 9/11 events. The sensitivity of so many people to having their feelings protected when they make and try to keep marital commitments and raise families, while other people "tell" and speak with such candor on global media never before available, seems to be a major stumbling block.

There is an LCR-SLDN announcement today about a display on the National Mall in Washington around the end of Nov. 2007, discussed here.
Posted by Bill Boushka at 1:06 PM