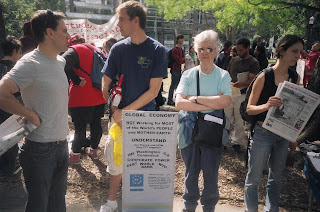 Whenever I subbed in a high school English class, it seemed that the first item on the lesson plan was always ten or fifteen minutes of journaling. Students kept not-too-personal “diaries” that teachers would check for progressing writing skills. Sometimes, the quality of what gets written is quite good and the content significant. Indeed, at least one major publishing event (“Freedom Writers”) resulted in California inner city schools as a result.

Journals do give the reader a street-level feel as to what is really going on in a culture. Fifty years from now, I would guess that some of them could be valuable literature, to tell future generations what really happened to real people in a historical period (this one). After all, some literature anthology reading assignments often are prose narratives of life in colonial or frontier America or some period in England. Usually the student needs some background in the social history of the period to appreciate the narrative.

The modern incarnation of the diary is, in part, the blog. Most of the better ones are detailed looks at some facet of some issue, often spiced up with some personal narrative that somehow links to the issue. The mainstream, professional credentialed press, having to be all things to all people, can’t get to that level of nuance and intimacy as an individual may in a blog (even though professional journalists write “professional” blogs about specific topics, like computer security, and everybody knows about political blogs tracking candidates.

That gives some insight into a blogger’s motives. I, for one, want people to know what is really going on, and I want future generations to know what really went on. I also want people go get beyond the obvious “self interest” when dealing with issues. Lobbying and advocacy organizations must, out of practical necessity, go for the lowest common denominator and present ads (and encourage form letters to politicians) making points in the simplest manner. Most modern politics and a lot of modern business, sad to say, must engage in manipulative sales efforts that contradict the notions of critical thinking we are supposed to learn in school (including the mandatory four years of high school English). Even many legal concepts (especially trademark law with "brand confusion" concerns and even right of publicity) are founded on an expectation of public reactivity without capacity for critical thinking.

A blogger’s motives have become a serious concern for employers, families, and possibly even the legal system. As I’ve noted, social networking sites have contributing to a culture that presents on-line self-presentation as a way get people to do things (first, interact, possibly in person, with the speaker). The immediate “benefit” to the speaker becomes more important than the content itself (especially with "free" or minimally revenue-generating content outside industry and guild norms). Employers then tend to look for a person’s online presence as a clue to what makes the person tick rather than for the objective merit of the content. This is a development that we really did not foresee developing until a few years ago, and the results have sometimes been costly for some job applicants and employees, sometimes unjustly. I don’t think it was even intended by Mark Zuckerberg and others who developed online social networking; it’s just a real-world result of a huge social experiment.

In my own weblogs, I’ve been documenting several trends that I have noted, developments that can have a surprising effect on our notions of individual liberty. One of these trends is what I’ve just noted, the way personal sites have been perceived as a social rather than publishing phenomenon. That gets into a murky area of intellectual property law called “implicit content”, which over time may turn out to be more important than censorship itself. As the COPA (Child Online Protection Act of 1998) litigation moves into its ninth year, I’m struck by how lawyer are paid six-figure salaries (maybe not that much) to draft arguments that rehash the same things over again, and miss the real point, that technology and society are changing faster than we can predict. Bloggers can do this on their own better than professionals can – until bloggers get jobs where they no longer can say what they want in public.

One of the trends has to do with the way we perceived personal autonomy v. “personal responsibility.” In the past few decades, we gotten used to thinking about responsibility for results of choices. Earlier generations accepted a more collective view of the concept, modulated by the family and group. What we’re having to deal with, in part, is that some responsibility for others comes at us and we have to accept some of it whether chosen or not. Family responsibility doesn’t always start with procreation. The demographic changes – longer life spans and lower birth rates – are making eldercare a moral issue for some childless people. We could come to the point of viewing filial responsibility as fundamental the way child support is. We’re not there yet, but we could well be heading in that direction. The major media hasn’t yet faced the impact of eldercare on the childless. Inevitably, it will have to, but you’ll see it first in blogs.

My venture into all of this started in the 1990s with the “don’t ask don’t tell” issue for gays in the military. What makes an issue like this (as well as the marriage and parenting issues for GLBT) is the returning notion at some responsibilities (and even sacrifices) have to be shared to defend freedom. The “greatest generation” that won World War II understood this, but in the 60s the “me generation” of boomers started to lose focus on this. But it is coming back with a vengeance.

NBC4 had a story tonight on making money through blogging, and for now I've quickly incorporated it into my blog on network neutrality (which would affect it) here.
However, I expect to look into this in more detail and probably post more information on this on this blog later.

I am starting to develop a more "professional" blog with WordPress and MySQL database on the confluence of technical and legal issues. The opening blurb is here. There will be more details (and advertising related information) later.
Posted by Bill Boushka at 12:06 PM