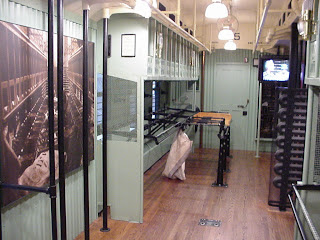 Kim Zetter has an article starting on page 171 of the September 2007 Reader’s Digest, “is Your Boss Spying On You?” The link is here. Most of the article is old school workplace ethics, with special attention to employer monitoring of workplace computers (this has been going on for at least a decade now), and the lack of laws controlling it. Some of the firings discussed in the article seem a bit capricious, and she does give “seven rules to live by” including not blogging from work computers (unless blogging is part of the job and it is about work).

Only at the end of the article does she get to the more modern concern about personal weblogs and profiles, even those maintained from home. “Bloggers, too, are learning that they have little protection for what they say about employers on personal websites.” No kidding. That’s how Heather Armstrong’s “dooce” website got started (and how “dooce” became a legitimate English language verb). Zetter then writes “And some are finding that online activity can damage a career before it begins.” Zetter goes on to give a story about a student teacher (Stacy Snyder, from Millersville University in Pennsylvania) who was removed from consideration for a teaching career after she showed high school students her Myspace page, that happened to have a graphic on it with the words “drunken pirate.” The high school thought her conduct to be “inappropriate” and “unprofessional.” We’ve heard that before about attention-getting online.

There are other stories about this incident online, for example, on The Smoking Gun, "College Sued Over "Drunken Pirate" Sanctions Woman claims teaching degree denied because of single MySpace photo", here. Another story is Digital Journal, April 29, 2007 "Woman Who Lost Teaching Degree Over MySpace Photo Sues University" here.
There is another story on BBSnews that gives the univerity's and school district's side: "Student Teacher Denied Degree Needed "Significant Remediation"
Wednesday, May 02 2007 Edited by: Michael Hess "Conestoga Valley School District Disputes Claim in Stacy Snyder Lawsuit Against Millersville University," here.

When one hears about an apparently outrageous case like this and digs deeper, one always finds more than one side, and various circumstantial and motivational complications. Now, of course, it’s easy to say that a teacher shouldn’t bring up personal matters in class or show students a personal webpage, as a matter of policy. But there is “personal” and there is “really personal” (of the Ang Lee “Brokeback” or “Lust, Caution” variety). In this case, the modern grown-up world, I would think, understands that the student teacher’s inscription does not reasonably imply an alcohol problem or encourage underage drinking. Yet – I know there is disagreement – look at how the Supreme Court viewed the “Bong Hits 4 Jesus” case – where I think the Court’s interpretation stretched things a bit. School system administrators (especially now, given all the horrific events perpetrated by a disturbed few) are, in their fear of litigation, very defensive and very protective of kids, and very reactive to even a suggestion of impropriety, a knee-jerk reaction that confounds common sense. And the trouble is many mainstream employers, especially those employing people who represent the company outside of work publicly, have similar concerns about “reputation defense.”

There was another incident somewhat similar in tone to this in Indiana, in which there are repercussions for publishing both sides of the gay rights debates in a school paper The Tomahawk at a secondary school called Woodlan. (The story was by Megan Chase, and the journalism teacher involved was Amy Sorrell) The story is discussed on another blog, "Gay Equality and the Law," here.
Another account is in "Advance Indiana" here. Another account is at the Student Press Law Center, here.

I outlined my own experience with repercussions of my own political-quasi-personal speech while subsitute teaching, particularly on the July 27 entry on this blog. Here, in this newer case (the "pirate" case from Pennsylvania, above) there seems to be a similar concern about “self-incrimination” that, again, goes beyond reasonable interpretation of motives in the adult world.

I'll add that I never gave my own web references to students, but I did to a teaching intern (on a piece of paper) and that led to a sequence. However, I overheard students characterize me as the "gays in the military guy" so I know that many of them had looked me up with search engines and knew exactly what I had written.

It does seem that school systems and other employers have come (partly because of the way social networking sites promoted the idea) to view social "reputation" and the "implicit content" (the idea that free content must be interpreted as inciting something from others) interpretations given to speech as more important than intellectual honesty.

As for getting back to the older topic of workplace computers, I was always pretty conservative myself with work computers. Back at Chilton around 1982, the Dallas credit reporting company baldly warned associates in a written memo, “If you use corporate computing resources for personal purposes, you will be terminated.” That was in the mainframe days, and if you wanted a personal computer, you bought one (then it was expensive, relatively speaking). Roscoe libraries were indeed audited. But in 1999, after I had a domain (set up by a workplace friend), I almost got in trouble once when he and I were talking about Microsoft FrontPage (now replaced by Expression Web) at work – I wasn’t updating my domain at work, merely looking at a technology that I needed to update it that we didn’t use at work (we used Allaire instead). I wasn’t disciplined, and in general the manager’s alarm was short-sighted: it’s important for technical employees to be curious and learn things on their own, even if not all directly used at work. Yet, employer concerns over security and trade secrets and customer data confidentiality seem to grow only more acute, leading to zero-tolerance policies on personal use of computers at work. Off duty blogging and social networking policies, which I have long advocated, are a different animal altogether.
Posted by Bill Boushka at 6:43 PM