Mainstream and amateur blogs blur together in their effect on campaigns; revisiting McCain-Feingold, campus speech 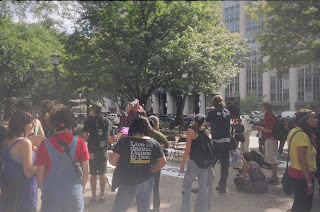 Conservative-to-libertarian op-ed columnist George F. Will provided a round-robin review of academic and campus free speech problems on Thursday, Oct. 25 in The Washington Post, p. A25, with a piece called “The 114.69 Speech Police.,” here. My own father (late as of 1986) used to note George Will’s merciless use of logic when he discussed anything on television or in the newspapers, and Will’s thought processes are rather like his. He told the story of Aaron Flint and his campaign for student senate at the University of Montana in Missoula. To counter well-organized opposition, he spent some of his own money on some posters, and was later removed from office for violating the university’s own “campaign finance reform” policies. He sued, his case went to the Ninth Circuit, where he lost to some circuitous rationalization from a usually liberal (and perhaps interventionist) circuit. Will mentions the duplicity even behind the Supreme Court's ruling on the "Bong Hits 4 Jesus" case in Alaska public schools. ("Advocating" drug use in connection with a public school is not as protected by the First Amendment -- but was that what now-English teacher Joseph Frederick was really doing?)

All of this comports, of course, with the debate that we had about McCain-Feingold over a year ago, and the “threat” that it was believed to pose to blogging. There is indeed, a curious paradox here. The “philosophy” behind campaign-finance is well intended to prevent well-funded special interests from buying influence and buying their candidates into office. But blogging has become an individualist as well as corporate activity, and it is, in practice, to tell where the source of a political ad is. A corporate ad on network television and a blog entry by me might both happen to say the same thing and support the same candidate and positions, but the psychological effect on the viewer or visitor is perhaps going to be very different (as well as the audience that is likely to be reached).

I reported (most recently in July of this year on this blog) how this controversy was related to an incident when I was substitute teaching. It appears to have been resolved with some recognition that the source of the speech matters, but even that, as Will points out, is troubling. Inherently there’s nothing wrong with, say, a pharmaceutical company flooding the network airwaves with ads about relief from product liability laws (they could, as we note, affect H5N1 and AIDS vaccine development) as long as other speakers can get appropriate equivalent attention for their views. And that depends on how well individuals pursue their own causes and how well they articulate and express their points.

Corporations and major newspapers and news broadcast channels have their own blogs by “professional” journalists, and the lines between the different sites and weblogs are getting blurred ineed. In the Friday , Oct. 26, 2007 Washington Post, Style Section, p C1, Howard Kurtz has a column “Mainstream Blogs Open Floodgates for Political Coverage,” a recounts an incident where Hillary Clinton called blogger David Yepsen about his entry in the Des Moines Register about her upcoming campaign plans. The candidates really do care, in detail, about what is being said about them. And well they should.
Posted by Bill Boushka at 6:52 AM