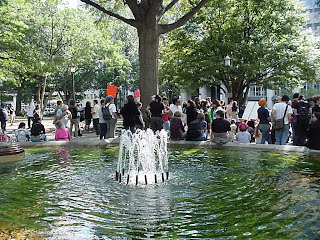 The UK version of Esquire (which rather looks like GQ with men made to look like cardinals), which does not yet have much free content available online (site), has a provocative article in the October 2007 edition on p. 142. This essay is “The Day the Web Stood Still: Every day, the Internet becomes more integral to the lives we lead. So could the plug be pulled on the world’s most vital resource, and what would happen if it was?” The author is Tom Guest, with photographs by Simon Norfolk. The magazine cover has a picture of Scottish actor James McAvoy on the front cover.

The essay plays some games. “I remember what I was doing when….” It goes on to explain how name servers work, than some in the United States are fixed physical locations, and others around the world in multiple redundant locations. It theorizes that attackers would have to knock out a number of these, possibly with microwave-related EMP attacks. Actually, failure might be gradual and occur over several hours or days, and the length of time until recovery occurs. In fantasy, recovery might never occur.

An article like this is always scary. On September 4, 2001, one week before 9/11 (the day after Labor Day) I saw and bought a Popular Science issue at Wahlgreens with a story on how our society could be crippled by electromagnetic pulse attacks. The article probably made it look much “easier” to pull off than it really is. The idea has been experimented with in the movies, such as in Oceans 11 (2001 -- the last movie I would see before my layoff), usually very inaccurately from the point of view of the actual science. Later that week we would undergo an unprecedented virus attack at work, with two days of disruption. People said, “This is the real thing.” Then the following Tuesday morning real tragedy struck.

As I have often written, the public Internet, opened up in 1992, seems to have transformed society and given unprecedented “power” to individuals to promote themselves regardless of social background or of family or business loyalties. This does not sit well with everyone, obviously. It does comport with libertarianism and modern conceptions of individual sovereignty, which are enabled in large part by physical and expressive mobility, dependent on technology. There is a paradox: to become more “independent” of social connections and responsivity, one needs to depend on a stable technological infrastructure, which could be undermined by a number of exogenous threats, some of them natural and some manmade. The Esquire UK article does talk about social changes if the Internet dematerialized, with people having to depend on local resources even for food, and having to place more value of hierarchal and familial social relationships.

Of course, a longer view of history, as the article says, stresses a gradual increase in personal mobility, and this could always be undermined. The recent Jesse James and Yuma movies show how easily passenger train traffic could be disrupted and made unsafe by outlaws back in the 19th Century.

The story also brings to mind whimsical proposals in Omni Magazine back in the 1990s (while it was still in print) that technology could some day be able to download someone's brain onto a computer so that he or she could live forever digitally -- until someone pulled the plug or wiped it out with an electromagnetic pulse!

The Esquire UK issue should be available on larger bookstores and newsstands in the US and this article is well worth looking at. It hope it's appearance is not a prologue.
Posted by Bill Boushka at 6:04 PM