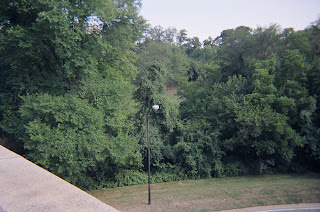 In 2001, I was living in Minneapolis, and still working in information technology for a major insurance company. I had been to Europe for two weeks at the end of April, and the summer was a bit weird. Remember, in the early part of the year the concerns (after the Bush inauguration and the aftermath of the 2000 election fiasco) had been foot and mouth disease, and Taiwan v. China. The public was not paying a lot of attention to radical Islam even though we know that the administration saw a parade of dire warnings all summer.

I made a long weekend trip back to DC the second weekend of August. On Saturday, Aug. 11, 2001 I spent the day at Rehoboth Beach, DE. There was a huge storm on the way back; I saw a tornado funnel cloud and was almost caught in a flash flood. When I got back I found that DC had an unusual manhole fire near Dupont Circle that day.

Back in Minneapolis, I moved to a larger apartment in the same highrise building on Aug. 29. I still remember “Two Men and a Truck.” I went up to Duluth (for Lake Superior Pride) and then to Thunder Bay Ontario for the Labor Day weekend. Sunday night, in the motel, I remember getting a bizarre email (about a threat) on my laptop, thinking it was spam or sent by a virus, and deleting it. I would learn later that others had gotten this email.

Back in Minneapolis, on Tuesday Sept 4, I remember, in a Walgreen’s drug store in downtown, seeing and buying a Popular Science magazine that warned about EMP attacks and how they could wipe out everything. That is done in the movie “Oceans 11” but it has to be at high altitude. I asked a couple of tech people at work about this magazine, and they thought that the scenario in the magazine was very plausible and scary.

Thursday and Friday that week, we had a virus on the servers that caused unprecedented disruption. My work station did not get infected (nor did any computer at home), but many other people did. Tech spent a few days rebuilding hard drives. This was “the real thing.”

On Monday night, September 10, 2001, I went to the penthouse swimming pool in the apartment building. For the only time in my six years of living in that building, I saw people playing water volleyball. That still sticks in my mind.

Around 1:30 AM on Tuesday, September 11, 2001 I woke up from a nightmare, that something awful had happened in Arlington. It was graphic and I won’t give the details here, but they definitely resemble what could happen. They might have been subconsciously related to the email I got in Canada. I remember specifically being relieved to be awake in the “real world,” and not having to live through a real “Purification.”

I got up a little late, around 7:05 AM, which is 8:05 eastern time, logged on to AOL, checked my email and web domains, and had a quick breakfast. I was about to sign off at about 7:42 or so and decided to print a few pages of personal documents. I believe that they were related to a phone call I wanted to make late that day to New York to a conference on political filmmaking to be held there in October. The printing took a few minutes. I had turned off the TV and didn’t look at Internet again. I signed off, and did the five minute 1000 foot walk along the Skyway to work. Once I got there, things were pretty normal for fifteen minutes, as I closed a couple of support tickets. Then, at 8:25 PM (9:25 EDT) a female coworker appeared in my cubicle and told me about the attacks, that had started forty minutes before. It was not possible to get to Yahoo! or CNN for any information. I went downstairs to operations, where they had a Jumbotron Cable hookup, and saw the picture of the Pentagon on fire. (That was about 8:45). I quickly walked back to the apartment, turned on the TV, and saw Peter Jennings with the two burning WTC towers behind him in the background. Almost immediately, one of the towers evaporated in a pillar of smoke, to his back, but right on live television. It was almost a minute before he realized that the South Tower had collapsed.

We had an unusual team building even that day. It was a cruise on the St. Croix River, departing from a town SE of St. Paul. We did not cancel, although many companies did. (We had done this a couple of other times, once on Lake Minnetonka). We carpooled at started the cruise at 10 AM, had lunch about 1, and got back about 4. It was a clear day, as perfect in Minnesota as had been reported in New York, and around 80 degrees. (Yes, it gets warm that far north). No one had any information. There really wasn’t that much talk about it. Some people though it could be related to Serbia or Bosnia as well as the Middle East.

On the way back, of course, we heard it all on the news. Osama bin Laden’s name was being mentioned constantly; the President had done his cross country flight to SAC at Omaha (he had been reading to second graders in Florida when he got the word). Another building, WTC 7, a 47 story building, would collapse because of fire caused by debris falling on it. We heard about other buildings around the country called "Twin Towers", as in St. Paul MN, and Silver Spring, MD (near the AFI Silver theater). Later, we would hear that Bill Clinton's first reaction was, "Osama Bin Laden did this."

That evening, I would go to a premiere (sponsored by IFPMSP) of the film L.I.E. (“Long Island Expressway) at the Lagoon Theater, a Landmark property in the Uptown area of Minneapolis. Director Michael Cuesta was present, and would be “stranded” in Minneapolis (there are far worse places!) a few days by the airline grounding. (That film would be mentioned in a screenwriting class back here in Arlington, with the role played by Brian Cox; the DVD would show editing done to take out the twin towers of the WTC.) We would see the one day gasoline panic, but we actually had a reception downtown that evening after the film. We would try to go on as normally as possible.

But life would change forever, even as the Bush administration quickly backed away from asking for personal “sacrifices.” We all know the history of the fall of 2001: the anthrax incidents, the commencement of operations in Afghanistan, the Osama bin Laden videos. It wasn’t long at all before we understood the meaning of all of this: asymmetry. If the Internet gave private citizens free entry to global audience and influence without normal competition and capital building, it could to the same for enemies. (One example that would surface is the possibility of sending Internet messages with steganography.) Osama bin Laden would stand by Hitler as an example of how one person could, somewhat unpredictably, have such a chilling and irreversible effect on history that seemed uncanny. I had never imagined that something like this would happen out of “religion.” But I can understand now how the desire to be “right” (or be self-righteous) and avoid the shame of bad karma can motivate very frightening behavior in some people.

Things would be crazy at times that fall. The very next day, Sept. 12, the media made a lot of a bust in downtown Boston, as if it would yield reassuring evidence. It did not. On Sept. 13, I got a bizarre phone call from a recruiter who wanted me to get involved in a bizarre pyramid scheme selling insurance, as if he knew my old career could end soon. Even bouncers at bars would toss people on the mistaken perception of something done. For a while, there was genuine fright.

My job and, as things have unfolded, conventional IT career would last 93 more calendar days, until Dec. 13, when I was "laid off" and retired at the same time, with it seemed a satisfactory severance. But I believe that had this tragedy not happened, with all of the economic fallout (and had there not been the accounting scandals) my "career" might have lasted somewhat longer. Some of the personal atonement must be mine.

In March 2003, I would be at another IFPMSP event in Bryant Lake Bowl when the war in Iraq would start, again on a Jumbotron screen. And now we actually wonder what for.
Posted by Bill Boushka at 12:03 PM