Parade magazine on electronic privacy, and employers: should they ask about online presence? 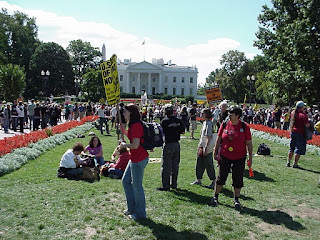 Today’s Sunday preview of Parade Magazine (in The Washington Post) has a high-level article by Sean Flynn “New Technologies raise the question: Is anything private anymore? In our digital world, it may be impossible to protect personal information”, on p. 4, Sept. 14, 2007.

Flynn points out a number of “big brother” devices: consumer databases (in construction at credit reporting companies for decades), surveillance cameras, electronic tollbooths (I could add Metro Smart Cards, which could be engineered to work in multiple cities), and last but not least, social networking sites. And, as Flynn rightfully points out, many parties do not have an scruples about mining such information. Divorce lawyers do it all the time.

Privacy has indeed turned on its head. Thirty years ago, gay rights was argued largely as a privacy issue. Now it is an equal rights issue because everyone wants to be public (making some of the logic of the military “don’t ask don’t tell don’t pursue” – Bill Clinton’s innocuous-sounding formulation in 1993 -- way behind the times technologically).

Flynn plays the employment card. Flynn writes about teens and young adults: “They’re grown up chronicling their lives on popular social networking sites like Myspace or Facebook for easy retrieval by friends or strangers alike. But some young people don’t realize what was funny to college buddies might not amuse a law-firm recruiter.” I reported a specific incident with law firm jobs on March 7, 2007 on this blog. Flynn writes “Employers regularly research job applicants on the Internet.” True. And there is a real danger they can pull up the wrong person on a search engine, with the misidentified target never knowing he or she lost an opportunity that way. I’ve already written that employers have an ethical duty to clean up this practice. (And I don't see what's wrong with a picture of someone riding a mechanical bull in a bar.)

Let’s put it down. Employers’ HR departments should announce personal blogging policies and social networking policies, and post them for associates and for job applicants, conspicuously, in job application scripts of their websites. The policies ought to depend on the job being applied for (as noted in the entry on Monday Sept. 10). Rather than troll and gumshoe with search engines, employers should ask about existing online presence when it reasonably might be job-relevant. I wonder if HR will coin a new item or jargon: "reputation policy." Ask and Tell.
Posted by Bill Boushka at 12:38 PM