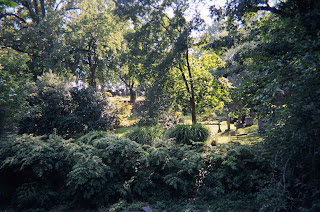 There’s been a lot of talk about online reputation recently, and in fact, tonight, Monday, Sept. 10, Jim Handly on Washington DC’s NBC4 station is supposed to have a report on it. I last wrote it about it here on Aug. 27 and Sept 3 but the concept seems to be evolving quickly.

Employers obviously have good reason to be concerned about employees whose job functions require them to be visible to the public. Sometimes the visibility is physical. Got to any bank, and one sees immaculate desks with bank officers ready to help customers. There is a physical (in the desk appearance as well as dress) suggestion that the customer should have confidence in the banker as a person. Of course, the concept applies in may other areas: financial planning, life insurance agents. Typically, in such positions, some degree of personalization in customer service occurs, even some smalltalk that seems a bit gratuitous to some people.

We see the concept in other areas, too, for example with teachers. There is a public expectation that the teacher is a “role model” for the child. This gets to be particularly sensitive because the concept of “role model” gets mixed up with marital complementary gender roles (and GLBT issues) in the minds of some parents. Some people do not like the idea of “pretending” to fill a role that does not match who they are. They may challenge this perception in other public spaces, like the Internet with all of its search engines, and the perception, as reports now say, can stay forever.

As noted before, the whole practice of checking employees on the Internet certainly comes into question. It’s easy to get the wrong person; common v. unusual names is an issue, and search engine companies never intended their work to be used this way (for covert “background investigations”). People sometimes find their reputations affected by comments made by others (or even photographs in public places) and sometimes these references are attributed to the wrong person. And in the business and political worlds, as we know even from recent scandals, the attitude seems to be "guilt by association, guilt by appearances, and guilty until proven innocent," the reverse of our normal legal concept of justice (as in the Bill of Rights.) And, as we noted, search engine companies are continually working with their page ranking algorithms anyway, a sensitive matter in the industry.

The issue becomes much more important with employees whose job requires them to speak publicly for the employer or represent the employer to clients in a public manner (leaving the workplace), who make decisions about customers, or who have direct reports. It’s more sensitive with jobs that involve selling work other than what the employee developed himself. (Obviously, this is a problem for the military, which has to provide oversight of soldier blogging from combat zones.) In these sorts of situations, I’ve said in the past that such persons (in such publicly visible or managerial jobs -- and that is by no means all jobs!) should not post their own views on things to public spaces (where the universe of possible visitors is not known or whitelisted) about things outside of supervision at all. (That could leave them with the option of letting organizations, which are partisan and non-objective, represent them, but that's the price for promotion or public responsibility -- all of this could make the legitimacy of some business sales models come into question -- in an automation age, does our economy really need so many publicly visible, marketing-oriented middle men to manipulate demand?) True, blogging for the company is part of some jobs, even for “professional” journalists. If such an employee accepts the supervision of a third party (which might even be a “profile management company”), or works through some formal networked journalism arrangement, then there is a distinct third party that the employer can identify and apply conflict of interest or moonlighting policies in a manner more customary in the past (before the Internet) – and indirectly, this answers some of the ethical questions about censorship. Another issue that will come up is updating compendium or encyclopedia sites (like Wikipedia) for the company, which is often anonymous but that creates obvious ethical issues.

Even if one has a job that does not involve significant "public responsibility", it's important to behave with good faith when making statements in public. Besides protecting confidential business information and trade secrets, one should avoid "gossip" about personal office matters involving coworkers or "the boss." One should be wary of portraying oneself as unsuitable for some aspects of the job, even if there are unusual external political circumstances that motivate the need to speak out publicly. (For teachers, the "role model" issue can come up, even for substitutes. The "Touching Doctrine" can matter here; see Sept 3 entry.) If one should not be in a job (even if there are ethical lapses going on at the job) then one should resign and not be there -- and then speak out. The bottom line is that the employer and customers need to have confidence in everyone at a business.

EPIC weighs in on social networking dissemination of information

I did tape Jim Handly's NBC4 evening news report (6 PM EDT) and watch it when I returned from an evening civic association walk (see the "issues blog" for today). Handly did, as has been done before, report that Reputation Defender and similar companies can try to have online reputations "cleaned". (I discussed this on Nov. 30 2006 in this blog.) He suggested "ego searching" on one's name and subscribing to alerts services.

Handly's story is called "Redeeming Your Online Reputation: Ways to Correct Some of What's Posted About You Online," here. Your reputation (in the sense of the first part of this post) may be intact, or it may be "in tatters."

According to this report, there seems to be a growing problem with the posting of information about people that would not normally have been problematic in the print age and that in the past would not have met the normal legal standards for libel or for invasion of privacy claims. Handly gives an example of a man working political jobs on Capitol Hill who was profiled in a college newspaper as having considerable credit card debt. The article is now available online and easily searched. He feels that it is embarrassing because it makes him look "irresponsible" when it refers to behavior when he was much younger, and that such information would not normally have been easily available to employers in the past until Internet and search engine technology combined with "free entry" made it an issue. But the information (in this college newspaper case) is true, and truth in our legal system is a complete defense to libel. (Remember all of Kitty Kelly's lectures on this topic, comparing the U.S. to Britain?) Some of the information that gets disseminated tends to be silly and of more concern for social relations or for dating (or marriages, whether straight or not) than for employment.

Handly reported that the Electronic Privacy Information Center is now saying that there may have to be more regulation on how personal information is disseminated or "leveraged" by others, even information that would not have been legally objectionable in the pre-Internet age. EPIC (which by the way gave a lot of support to web speakers during all the COPA litigation). In fact, EPIC has a major discussion that focuses on social networking sites, and the report has a section called frankly "Control of Information: The Means of Dissemination Matters." The link URL is this. It also has a section "Who Gets Access?" and mentions the job recruiter problem, fishing for "unedited" information about candidates. There is some detailed discussion in this essay on Facebook's News Feed and its control and its understandability. That's ironic in that Facebook was probably the first Web 2.0 SNS to offer default whitelisting, which itself can be compromised.

I generally keep these blog entries focused on issues, and mention names in a negative context only when they are already widely disseminated by the "professional" media; in most criminal matters, I mention names only when there is a conviction or confession. I don't "out" people that I see at parties or bars. (Is there a presumption of "your own business" if you're a celebrity and go to a gay disco?) Even the wide dissemination (the number of search engine "pages") is a nebulous concept; blogs and static sites run by individuals or "amateurs" often leave information up much longer than corporate sites, that tend to archive stories and want to charge for them. I can even imagine this issue coming up in the context of genuine knowledge management (Wikipedia, or expansions of open-source Wikis that I have proposed for political and social research).

Update: September 26, 2007. NBC Today and Matt Lauer talked to Myspace founders Chris De Wolfe and Tom Anderson, who did advise that people should not post on their profiles materials (pictures or text) that they wouldn't want employers to see a few years later. (They also added that now human being associates review every image posted on Myspace, hard to believe.) The idea of "social networking" may have contributed to the employer view of online blogging as "conversational" or "social" rather than "literary" (though in a self-published sense). Employers will not like to see their associates cause customer "doubts" about confidence (all the more in religious contexts); whereas literary publishers may find "doubt" the essence of academic truth seeking.
Posted by Bill Boushka at 8:44 AM