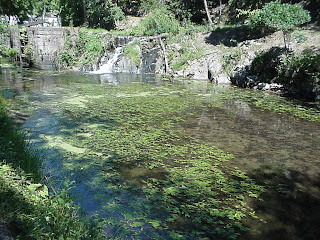 The more recent stories (released by major media outlets last week) about the writings of Cho Seung-Hui at Virginia Tech do bring up a disturbing trend about the way “amateur” writings may be looked at – as “evidentiary” of what the writer may want to do or might actually do at some unspecified time in the future. (Tim Craig has a story in the Sept. 6 Washington Post, Metro Section, about possible litigation from survivors' families, which could result in reinforcing the "Touching Doctrine," discussed on this blog July 27, in Virginia.)

Last week, VPI officials discussed a creative writing projected handed in by Cho that had particularly violent content and apparently related to Columbine (1999). Apparently this particular manuscript had not been known to Virginia state police investigators. Professors had already been disturbed by some of his poems and by two short screenplays that were uploaded to the Internet last spring after the tragedy at VPI. The impression is that the content of his writings could have been used as justification for mandatory mental health intervention. Of course, added to all of this is the “rant” that he sent to NBC and the “manifesto” apparently found in his dorm room. It seems that the word “manifesto” has gotten to become a pejorative. But this case, however tragic, is very extreme in detail, and it shouldn't necessary set a precedent.

Of course, in addition, there is one obvious question. In any college course, writing turned in from a professor’s assignments must meet the parameters of the assignments, which usually limits the range of what is acceptable, even in a creative writing class. It’s hard to believe that the writings in question would have met reasonable academic standards. (I suppose in a screenwriting class the range of subject matter could be quite wide, however.)

But there are other examples of this sort of thing. Sunday night (Sept. 2, 2007) NBC Dateline aired a report ("Thief of Hearts") about a mortgage crook Michael Bevan Cox, who had written a novel (“The Associates”, apparently unpublished as far as I know but shown to various people) in which he outlined a “perfect crime” scenario for mortgage fraud. He proceeded to live out the blueprint of his novel, and unlike the fictitious protagonist, he finally got caught and wound up in orange jumpers.

European literature, too, as studied in high school and college, contains some examples of this sort of thing. In William Shakespeare’s Hamlet, in the second act, the prince has a visiting troupe perform The Murder of Gonzago (or Mouse-trap) to trap Claudius in his guilt. There are lot’s of examples of the “play within a play” (even in other Shakespeare) (Clive Barker has his metaphor “fish within a fish within a fish” that Gentle, to his disgust, is forced to eat in his journey through the Third Dominion of Imajica). But in the recent French period-piece film Moliere, the famous French playwright uses his writing technique to outwit a benefactor who wants to use an amateur play to win the heart of his beloved! (Or try Marc Forster's film "Stranger than Fiction" where an IRS auditor experiences being a character in a novel as it is written!) Clearly, there is a precedent in literature for the idea that stories are supposed to “incite” people.

Most of these examples concern fiction items in rather limited, person-to-person circulation. But imagine, then, what happens, as people, in a mode of self-expression, put all kinds of quasi-fictitious scenarios about themselves (or people like themselves, or like recognizable others) on the Internet. This ties into the concerns that employers have and their checking profiles and blogs of job applicants.

I would like to think it is OK to write a story or screenplay and pose a hypothetical situation. “What if …” But sometimes people take this, when written by an amateur and not produced or published in normal channels to make money in a legitimate way, as an indication of what is likely to happen. The military has this issue in the way it enforces the “don’t ask don’t tell” policy for homosexuals.

My main domain (doaskdotell.com) has some sceeenplay scenarios, and I have had to reduce what I display online to deal with the “implicit content” problem. But wrongdoing in my fiction does get caught, usually.

It’s all quite quixotic. We want the Internet to be the Wild West of free expression, but we suddenly have very icy feet when faced with non-conformity to prevailing expectations of honoring certain fears and prejudices. I wonder…

Clive Barker begins his massive epic fantasy "Chinese puzzle" novel Imajica (I hope it becomes a knockout $100 million budget movie from, say, New Line) with a passage that seems applicable in a bizarre way. “It was the pivotal teaching of Pluthero Quexos, the most celebrated dramatist of the Second Dominion, that in any fiction, no matter how ambitious its scope or profound its theme, there is only ever room for three players….It was a hard philosophy, but he claimed it was both immutable and universal, as true in the Fifth Dominion, called Earth, as it was in the Second. And more significantly, as certain in life as it was in art.” I’ll add, it’s what finally happens in the First Dominion that really matters.
Posted by Bill Boushka at 7:12 PM