Bloggers as journalists -- more numerous, more professional? what about self-promotion? 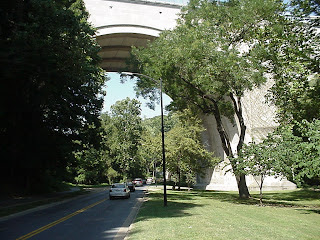 Eight percent of Americans have their own blogs, now. More women than men have their blogs. 57 million people now read blogs on the Internet with some frequency. So reports Jennifer Harper on p A1 (print) of The Washington Times on Wednesday, Sept. 5, 2007, in the story “Blog viewers still watch TV, read the paper: Sites for fun, not news.”

True, most readers look at blogs to be entertained, or for arcane material in their own niche worlds of special interest. Most readers still believe that news should come from conventional journalistic sources, with their professional tradition of fact-checking and objectivity. However, some blogs get better and approach traditional news media in the ability to present the public with cutting edge changes. The best blogs would normally cite factual sources carefully, and the more factual and objective a blog is, the more appropriate it is for self-syndication through RSS feeds. Nevertheless, the ultimate value of a blog may be in the speaker’s ability to inform or warn others about trends that may otherwise seem to come out of the blue once the regular media wakes up to them.

There is an ongoing debate, to be sure, about “citizen journalism” or “networked journalism”, which was discussed on this blog on July 31. The role of “citizen journalism” and its putative effects on elections was the subject of a lot of attention within the Federal Elections Commission, which had to tow the line between open speech and hidden support for politicians, as was covered in this blog previously.

There seems to be a new concern about the ways bloggers can attract attention to their work. Online encyclopedias (particularly Wikipedia) has told contributors not to express their own opinion or promote themselves, certainly understandable advice for contributing to an objective reference. On the other hand, companies look for new ways to make money off of user-generated content. Recently, there has been more attention to various practices of linking. Bloggers should be particularly careful about allowing others to pay them for reviews and promote products – an ethical question if a blogger wants to be respected as a “journalist” – but leading to other business risks, as in the article “The Dangers of Link Farming Out Paid Reviews,” here.

Search engine companies have various proprietary systems for presenting search engine results (PageRank, for example), and it’s no surprise that other operators try to come up with automated schemes to beat them. This is not so much a legal question now (other than the fact that ranking algorithms would be trade secrets, however transparent the underlying linear algebra is to mathematicians and programmers) as a business model one. Search engine companies have provided a way for novices to “promote themselves” because the mathematics of their business models work a certain way (one can track all of this in detail on Wikipedia). It’s not necessarily “enlightened self-interest” (as Ayn Rand would put it) to try to outsmart these models just to get a quick short-term advantage or payoff. (SEO, it seems, is a big business, though.) There is a new technique for providing links without appearing to affect rankings, “rel=nofollow”. It’s not clear to me that this is necessary for a webmaster with several domains when they all have legitimate content with varying context (static analysis v. “news” in my case), but they certainly seem appropriate when users are allowed to add comment links of their own (which may be automated and inappropriate). This seems to be an evolving area with more details to be discussed later.

It is interesting to experiment with the Google Toolbar and see how various corporate and organizational sites rank.
Posted by Bill Boushka at 3:12 PM