The best teacher I ever had (for US History, junior year) 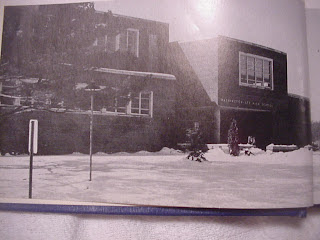 The very best teacher that I had was my eleventh grade Va. and U.S. History teacher, Mr. Simon Korczowski. I took his course in the 1959-1960 school year at Washington-Lee High School in Arlington, VA, then one of the top academic public high schools in the nation. (Note the name of the course: Virginia comes first!) The classroom was in the first floor of the three-story brick building that has since been torn down and is now being replaced with a four-story structure. On the first floor, it faced the athletic field and running track, leading to Washington Boulevard, and impressive sight when snow-covered. My seat was on the left side of the room, near the window.

Mr. Korczowski had been decorated in World War II and had quite a bit of military bearing (he wore a bow tie to class), but had, in the era since the War, developed progressive political views that he wanted to teach students to figure out for themselves. We think of military people as being conservative, but many liberals are former military heroes.

What made him controversial at the outset was his “all essay test” policy. Each test would have some identifications and four essay questions. As the year progressed, most tests offered a choice (answer any four of six). The final exam had a choice of eight out of twenty-five questions (I remember a question about the significance of the Fall Line). He graded hard. On my first test, the third Monday of the year, still September, I got a 79 (that was a “D” on the school scale). I got 15 out of 20 off on a question on mercantilism (and the role of "mother country") in the colonies. (So, history teachers, make sure you ask a question on this on your first test this fall.) But I made a 93 on the second test and got a B for a the quarter and eventually squeaked out an A on the course. They say (at least the character Ephram says this on TheWB Everwood), "junior year is the hardest year." Right?

He also gave notorious pop quizzes, mostly on current events. These were the post-Sputnik Cold War days late in the Eisenhower administration (before Kennedy and the Cuban Missile Crisis).

He was trying to teach students to connect the dots – exactly what we blame our intelligence services for not doing today. He spent a lot of time on the social issues of slavery, race, reconstruction, segregation, and Brown v. Board of Education. “With all deliberate speed” the Arlington school system had barely made any progress then with desegregation. (Arlington, however, for the time, was a progressive community in a conservative state, a relative conclusion that I would learn quickly with my lost semester at William and Mary in 1961; look at Farmville in the early 60s.) But he wanted the students to “get it.” Some of the exam questions (especially about Reconstruction) were themselves controversial. He would insist on very complete answers to his essay questions, taking points off for “leaving out” major reasons or lines of argument behind some particular event. He wanted the student to understand why things happen the way they do.

Once, he broke down, and the mid-term, because of school pressure, had one day of multiple choice – just 20% of the mid term. When he did give the test, each question allowed more than one correct response and the student had to find all of them.

We also had an in-class book report toward the end of the year, on John Kennedy’s “Profiles in Courage.” I got an 85 on that. He marked off on those papers because, as he said, “I didn’t learn anything.”

In twelfth grade, for Va. and U.S. Government, I had Stanley Book, a younger man with a similar zeal. Again, maybe 2/3 of the tests were essay. The course was more like an AP course today, a kind of college “political science” course that maybe Stephanopolous could give at Columbia. We had a student teacher the second quarter, and I remember the mid-term. “Compare communism and democracy.” A better term for the latter (if you follow The Washington Times) would be “liberal democratic capitalism.” Indeed, the neo-conservative Bush administration is coming to grips with the difficulty of exporting that to the Muslim and other parts of the developing world.

I would say that these two teachers were quietly preparing the next generation of activists. Mr. Korczowksi’s style of reasoning was very much on my mind as I pondered the debate on the military gay ban in 1993 and finished my first book in 1997. Without having been taught by him, there would have been no book. He taught us to see past the superficial arguments and realize what would happen if the same arguments could be applied to other similar issues. (Read in a modern “projective geometry”: if you can ban gays from the military, you can find reasons to ban gays from other things.) His way of thinking would take down “don’t ask don’t tell,” lead to a razor-sharp view of affirmative action, and would prevent misadventures oversease, and it would keep a people sharp enough to see the real dangers coming. (Yes, 9/11 would have been prevented if only a few more people had connected the dots.)

On one sub assignment some time back, the tenth grade kids were supposed to write current events reports on newspapers. The Washington Post that day had major stories on Saudi Arabia and on our dependence on oil imports. The kids made paper airplanes out of the physical instances of the stories. They had not a clue. And they will inherit this world from us.

Update: 10/1/2007. Check the essay by Fairfax County VA and George Mason University English teacher Erica Jacobs, "The meaning of a teacher's legacy" in the DC Examiner, p 32 in print, Oct. 1, 2007, here. Note how kids feel about "just subs" (my subsequent Sept. 24 posting in this blog).
Posted by Bill Boushka at 9:03 AM

I am Simon Korczowski's niece. I grew up in Colorado, my mother was from the West Virginia region, which is where they (family) grew up. He was a great person to have in the family and the family too...always got into conversations beyond the obvious. I am so pleased to read your comments and that he carried those thoughts to the classroom too..

Thank you for giving him such a glowing report...I am very proud to be a part of his family.